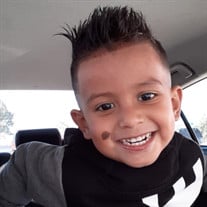 My son Abner Salmeron Bautista passed away tragically due to a fire incident on January 24, 2022. He was only 5 years old. We nick named him Choco because of his mole on his cheek. Choco was very energetic , smart, and funny kid. He made everyone laugh and smile. He was the light of the house. Choco was also a gentlemen because he would hold little girls hands and helped them down the stairs. He treated them like princesses. Abner had a best friend named Arturo. Choco would love going to his house to play and when it was time to go he would cry because he didn’t want to leave. Everytime we would hang out with Arutro, Choco would hold his hand while crossing the street. Me and his mom were even thinking about putting them in the same Kindergarten school so they won’t be scared of starting the first day of school. He took care of everyone. Now that i think about it... its like having an angel in real life. I knew he was too good to be true. Arturo now asks “who am i going to play with?”. When Choco would see me cry he would come up to me and say, “don’t cry mommy its okay” and wipe my tears. If choco would see that I was cold he would go and get me one of his little sweaters. He also had his good and bad days. When he would get mad he stomp his little feet and head back to the bedroom. His gibberish would brighten everyone’s day. The smile he would have was as bright as the sun. There would also be times when I would tell him to put on his shoes. When we would go out I didn’t even notice his shoes were put on backwards until a family member would point it out. When I would be sitting on the couch watching TV Choco would come up to me with a blanket. When I saw that I knew he wanted me to wrap him in his blanket and carry him in my arms until he fell asleep. Choco preferred me over anyone. He would give me the biggest hugs until he chokes me and attack me with lots of kisses. He was very playful. When Choco wanted to play with me he would grab on to my leg really tight and loved for me to try and walk around like that. I thought it was silly but made me laugh. Abner would also give me and his daddy massages. When it was time for dinner he would go look for his dad and say, “daddy come eat.” He sometimes would even face time his dad while he was at work just to tell him to come and eat. Choco loved playing with his toys and watching movies. His recent favorite movie was Polar Express. He loved trains. I was planning on taking for a train ride to Downtown Denver this year during the summer, but unfortunately God had other plans. Abner also loved car washes. Every time we would be driving around in the car he would always point to every car wash and train he saw. He was also a crazy sleeper. He would sometimes slap and kick me in the face. Sometimes when I would wake up his head would be towards the bottom of the bed and his feet on the pillows. I would sometimes have Choco sleep in his own bed because of how crazy he slept. When Abner would sleep in his own bed he would wait for his daddy to leave in the morning just so he can lay down with me and we’d go back to sleep. There would also be times when Choco would tell me to hug him. Every night we would tell each other goodnight and I love you. Now all I have is good memories. Abner Choco was a wonderful kid who didn’t deserve to pass away like this. I will always love and remember him. Thank you all who have donated, shared, and companied me in this big tragedy. I know my son has touched a lot of hearts and now we have a big empty spot inside us. God bless you all and thank you for everything everyone has done for me and my son. God Bless you all.

My son Abner Salmeron Bautista passed away tragically due to a fire incident on January 24, 2022. He was only 5 years old. We nick named him Choco because of his mole on his cheek. Choco was very energetic , smart, and funny kid. He made everyone... View Obituary & Service Information

The family of Abner Salmeron Bautista created this Life Tributes page to make it easy to share your memories.

My son Abner Salmeron Bautista passed away tragically due to...