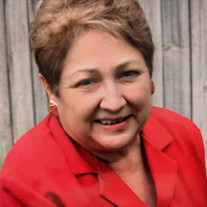 Adelma Castle entered into heaven on December 2, 2021 at the age of 74. She passed away peacefully in her sleep with her daughter, Sharee, at her side. Del was born in Denver, Colorado on August 21, 1947 to Adelmo and Cordie Gonzales; the oldest of 6 children. She spent her early years living with her grandparents on their farm in the San Luis Valley. It was here that she developed a love for animals. Her grandparents had cows, pigs, chickens, dogs and cats. Del graduated from Palmer High School in Colorado Springs and attended Blair Business College to earn an associates degree in the legal profession. She became a legal secretary for a group of El Paso County attorneys who were doing pro bono work. She continued to work various jobs throughout the years, but her family was the center of her focus. She attended all school functions, was part of the PTCO, was a Den mother and Scout leader, drove kids to and from practices, made sure the family was at every church service and still had dinner on the table every night. That love for her family continued with her grandkids and great-grandkids. She never came for a visit empty handed, and you could count on her to remember everyone’s birthday. Del married Edgar Castle in Honolulu, Hawaii in 1969 while Ed was serving a tour of duty in Vietnam. They were happily married for 52 years. They had three children together, Robert, Anissa and Sharee. Del enjoyed doing various crafts, scrapbooking, baking, cooking, gardening and any activity with her family. She was raised on the pews of the church and had a deep personal relationship with God. She acted out that relationship through her many acts of service with everyone she encountered. She had the biggest heart and will be deeply missed by all who knew her. Del was preceded in death by her mother, father and infant brother, Nicky. She is survived by her husband, Edgar, children Robert (Lisa), Anissa Blake (Jason), Sharee Bryant (Nathan). She is also survived by her sisters Treeza Leasure, Dianne Clemens and Sarah McCarger and brother Victor Gonzales; grandchildren Shavon Garcia, Rebecca Uribe (Julian), Raquel Luechtefeld (Isaac), Sarah Worvie (Edward), Daniel Tellez (Eboni), Jackson Blake, Andrew Blake, Addison Blake, Noah Bryant, Samuel Bryant, Benjamin Bryant; great-grandchildren Thomas Garcia Jr., Jade Garcia, Seth Garcia, Aiden Garcia, Ian Garcia, Romeo Uribe, Kalycia Uribe, Enoch Luechtefeld, Ava Hart and Eve Hart. Del will be laid to rest at Fort Logan National Cemetery in a private ceremony at a later date. We, the family of Del Castle, want to express our sincere gratitude and appreciation for all of the love, prayers and support we have received during this difficult time.

Adelma Castle entered into heaven on December 2, 2021 at the age of 74. She passed away peacefully in her sleep with her daughter, Sharee, at her side. Del was born in Denver, Colorado on August 21, 1947 to Adelmo and Cordie Gonzales; the oldest... View Obituary & Service Information

The family of Adelma Castle created this Life Tributes page to make it easy to share your memories.

Send flowers to the Castle family.