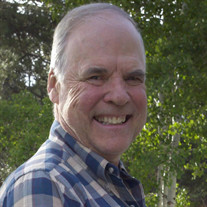 Albert J. Veinberg December 5th, 1943 – May 15th, 2021 After 77 beautiful years, God has taken our larger-than-life husband, father, grandfather, and faithful friend Albert "Al" J. Veinberg to his final resting place. Albert, born in Riga, Latvia, passed away at St. Anthony Hospital in Lakewood, Colorado. His passing was comfortable and peaceful with his family beside him. Al and his family immigrated to the USA in November of 1950, and they were sponsored by the community Lutheran Church in Chatfield, Ohio. On their trip across the big pond, he happily recalled watching his mother sew new pants for him so he could be presentable for the Statue of Liberty. With a short stop in Indiana, the family finally settled in the beautiful state of Colorado, which would remain his home for the rest of his life. Al graduated from East High School, Denver, in 1963. He had fond memories of the friends and teachers he met there. To quote him directly, "We were doing all kinds of shit… Physics, Calculus, Geometry, and Latin too." Now that East High Angel has become our angel. Just when Al thought life couldn't get more exciting, he was drafted into the military in 1968—stationed at U.S. Continental Army Command Headquarters (USCONARC)(H.Q.) at Fort Monroe, VA as a systems analyst/programmer. He was honorably discharged as a Specialist E-5 in 1970. "I want to be like them someday," is what he'd say while recounting seeing American soldiers while living in a displaced persons camp in Germany in the 1940s. He got his wish. Al considered his service to his country an honor and a privilege. Al made many friends while working as a Project Engineer for the Colorado Dept. of Transportation (CDOT) for 33 years. There are plenty of bridges and intersections throughout the Denver-Metro area that he helped plan or design—and he was happy to tell you about every single one of them. Al was incredibly proud of the work he did with the Colorado Historical Society while at CDOT. He helped secure federal funding to have beautifully designed signage denoting places of historical significance placed throughout our great state. His family sees these markers and thinks lovingly of him and how he had a hand in their construction. Albert received his B.S. in Finance from the University of Colorado, Boulder '70. In 1982, He received his graduate degree in Public Administration from CU Denver. From the school of hard knocks, his third degree came in the '70s while he was a bouncer at the Little Bear in Evergreen on weekends. He proudly proclaimed, "I wasn't a bouncer; I was an Intemperate Behavior Moderator." For us laypeople, that's a bouncer with a college degree. Al somehow managed to woo and marry the love of his life, Gayle, in 1978. Al was able to win her over with a charming conversation they had the day they met. He told her, "I'm Latvian, I work for CDOT, and my mom likes me." That sealed the deal. They were married for 42 ½ years, to be exact. Gayle, you have formally cemented your sainthood. Al and Gayle had two children, Erik '80 and Julia '81. With his large, warm hands, he picked up his children when they fell and continued to do so throughout their lives. He taught his children many necessary skills, including but not limited to: how to ride a bike, catch a fish, chop wood, change a tire, and of course, play poker. As a gentle, ever-caring father, he taught his children kindness and compassion and, in his words, I gave them their smarts…and their looks." (Gayle, we know those really came from you.) His comforting presence will truly be missed. Al had a joke for every moment in life, and those who knew him had heard them all at least a million times. He was a master of many things, including math no one uses in real life, poker playing, collecting old mail, and of course, the "comb-over." There was never a dull moment with him—his gregarious, boisterous, loving spirit will leave a void in our hearts. He was an epic person and will be sorely missed. Al was a proud member of the American Legion Post #2001 and Elks Lodge #2363 in Evergreen, Co. Albert was preceded in death by his father, Arnold, mother, Olga, and youngest brother Karlis. Albert is survived by his loving wife Gayle, devoted children Erik and Julia, son- in-law Jakob and brother George. He is also survived by his four grandchildren, Peyton, and Leif (Erik) and Killian and Benjamin (Julia and Jakob). Al will be laid to rest at Fort Logan National Cemetery with military honors on June 8th, 2021 Services will be held at the Lutheran Church of the Cross in Evergreen, CO, on June 6th, 2021, at 4:00 PM - 28253 Meadow Dr, Evergreen, CO 80439. A celebration of life to follow directly after services at the Evergreen Elks Lodge on June 6th, 2021 - 27972 Iris Dr, Evergreen, CO 80439. In lieu of flowers, the family asks that donations be made in his honor to the Wounded Warrior Project or the Colorado Wolf & Wildlife Center.

The family of Albert J. Veinberg created this Life Tributes page to make it easy to share your memories.

Send flowers to the Veinberg family.