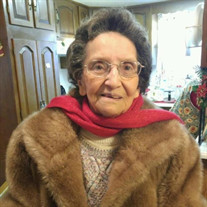 Anna (Sandoval) Maestas Hart August 9, 1929 ~ January 25, 2021 (age 91) Anna Sandoval passed away on January 25, 2021, in Denver, CO. She died exactly 4 years to the anniversary day her “baby brother” Richard Sandoval’s death. We will always believe he came to welcome her through Heaven’s gates. Anna was born to Joe (Noe) and Lupita (Maestas) Sandoval on August 9, 1929, in Las Salle, CO. She was the oldest of 10 children. She was 10 years old when her family moved to Brighton, CO. In 1946, at the age of 16, tragedy struck her family. A car accident involving a drunk driver killed her mother and 2-month-old brother, Charles. Her father was seriously injured and remained hospitalized for over a year. He eventually recovered. However, seven children were now left without a mother. Anna had to quit school and work at a laundromat to help put food on the table for her other six siblings. Times were very hard, but they all grew to become successful and productive adults. In 1949, Anna married Joe Maestas while he was serving in the Army. During that time, they started their family, moving and living at different locations, wherever Joe was stationed. When Joe was sent overseas to the Korean War, Anna moved back to Brighton. When Joe returned, they moved and settled in Nebraska. Joe passed away in 1977. Anna remained in Nebraska. She met a neighbor while walking to work one day. His name was Jack Hart. They became friends and fell in love. Anna and Jack married in 1990 and lived happily together until Jack’s death in 2009. Anna stayed in Nebraska for several more years and eventually moved back to Colorado to live closer to her sister, Lucy. She lived at Ashley Manor Assisted Living Center, in Ft. Lupton, where she is fondly remembered by the staff and residents. Anna was a very religious woman. She was also a strong woman. Anna endured many tragedies in life, but her faith and spiritual strength helped her endure. She had a feisty, fun, and friendly personality and was quick to make friends. She always loved to visit family and friends. She enjoyed baking and was known at her church for her delicious pies. In addition to baking, she also liked to cook and loved to make tortillas. She also enjoyed reading until recently, when her sight began to fail. Anna loved to sew, but had a particular passion for crocheting. Members of her family are blessed to possess some of her beautiful doilies. Anna is preceded in death by her parents; her children, Joseph Raymond Maestas Jr., Virginia Doiel, and Doris Krueger; granddaughter Oraina Queen, granddaughter Lupe; sisters, Alice Sandoval and Isabel Vela; and brothers, Joseph, Felix, Ben, Richard, and Charles Sandoval. Anna is survived by her daughters, Darlene (Ron) Allgood, Vivian (Joel) Rossell, and Olivia Maestas; son, Jim Maestas; 15 grandchildren, 23 great-grandchildren, and 6 great-great grandchildren; and sister(s), Margaret Weideman and Lucy (Phil) Trujillo.

The family of Anna Hart created this Life Tributes page to make it easy to share your memories.

Send flowers to the Hart family.