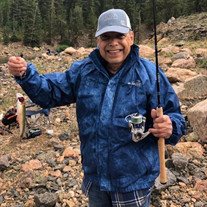 Berardo “Barry” Rojas was born in Denver, Colorado to Manuel and Guadalupe Rojas on July 18th, 1952. He entered into Eternal Life in Lakewood, Colorado on December 21st, 2020 at the age of 68. When he was young, Barry went to Vietnam where he was a helicopter pilot and technician- achieving the rank of Sergeant. Once leaving the Army, he received an Associate’s Degree in Electrical Engineering while working as a train mechanic for Union Pacific. He would use that degree for not only his entire career, but also to help everyone in is life by having the uncanny ability to fix and/or create creative solutions for almost anything. Barry was preceded in death by his parents Manuel and Guadalupe Rojas. We are sure they are together again now. He is survived by his loving wife, Debbie (Hurtado) Rojas, his children, Roman Rojas, Leslie (John) Pacheco, and Robyn Trace. His grandchildren, Johnny Pacheco, Jacob Pacheco, Logan Trace, and Michael Trace. He is survived by his siblings, Rosemary Munos, Laura (Juan) Pasillas, Carmen (Ralph) Venegas, Kathy (Rich) Rojas, JoAnn Chapman, Bella Rojas and numerous nieces and nephews. Those who knew Barry, knew he was a fun loving guy, but they also knew about his caring spirit. If anyone needed him, he would be there. If you were sick, he would take care of you. If you needed help, he would find a way to help you. If you needed something fixed, he would fix it or find someone who could. He was also the best grandpa around. He shared so many things with his grandchildren, his love of building things and working with his hands, cartoons, comic books and general silliness. He never missed a performance, or a game, he was their biggest fan. After beating a heart attack and a cancer diagnosis, he decided he would live his life to the fullest and enjoy as much time as possible with family and friends. He didn’t like being still, he knew his time on earth was limited and he refused to let anything keep him from living out the time he had left. He did not go gently into that good night- but rather took the path less chosen. When he left us to start his next adventure, he was surrounded by his family. He was not alone, and we will never be without him because his laugh, his stories, and his love will be with all of us forever. Military Honors Burial (immediate family allowed only) at Fort Logan National Cemetery. He can be visited starting Friday January 15, 2021 after 4:30PM. Due to COVID19 the family provided a Livestream for the funeral and burial services for those who cannot attend, please click on the link below; https://www.warwickadventures.com/funeral-videography-colorado/memorial-broadcast-01-15-21/

Berardo &#8220;Barry&#8221; Rojas was born in Denver, Colorado to Manuel and Guadalupe Rojas on July 18th, 1952. He entered into Eternal Life in Lakewood, Colorado on December 21st, 2020 at the age of 68. When he was young, Barry went to Vietnam... View Obituary & Service Information

The family of Berardo "Barry" Rojas created this Life Tributes page to make it easy to share your memories.

Berardo “Barry” Rojas was born in Denver, Colorado to Manuel...

Send flowers to the Rojas family.