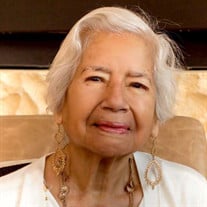 Celia V. Rangel, age 95, of Denver, Colorado, had a peaceful passing on Friday, March 4, 2022 at the home of her eldest son, Charles (Carlos) and his wife, Josie Rangel. Her second eldest son, George (Jorge) and his wife, Clara Rangel, were also present. Her close family and grandchildren kept a lengthy vigil during her passing. Lawrence Rangel, her husband of over 52 years, preceded her in death on March 23, 2000. Celia was born May 26, 1926 in Cheraw, Colorado to Abundio Vasquez and Faustina Perez. She was the third youngest in a family of twelve, all born and raised in Cheraw. She had a love of music and played the piano for several years during her youth. She graduated with honors from Cheraw High School in 1944. She was awarded a scholarship to Barnes Business College in Denver, earning an Associate’s Degree. She became one of the first Hispanic female accounting supervisors while working at the May D&F Department Store. In 1948 while attending a dance, she met and later married Lawrence B. Rangel, a career Air Force NCO. Together, they were blessed with three sons, Charles, George, and Martin. During Lawrence’s 25-year Air Force career, Celia and her family spent a great deal of time traveling around the world, living in Japan, France, and Spain. Celia continued her career, working part-time as an accountant/bookkeeper for the USAF. She loved to participate and win tournament awards in bowling, bridge and pinnacle. Her hobbies were music, dancing, ceramics, embroidery and traveling. She was an avid reader of Danielle Steele romance novels, watched Western movies and tennis. She liked tennis because it reminded her of her brother David, who excelled in tennis. She gifted all of her beautiful tablecloth embroideries to family. One beautiful tablecloth was gifted to Our Lady of Guadalupe Parish in La Junta, where it is used to cover the mass altar. She and Lawrence spent many enjoyable years traveling to Mexico visiting and helping relatives, dancing on weekends, and involvement in various political activities. Just prior to her illness, she continued to travel often with her family to Las Vegas, Hawaii, Mexico, the Caribbean and Europe. During her three year debilitating illness, she spent as much time as she could walking outdoors for exercise, embroidering and reading. Her determination to get well, even after becoming wheelchair bound, was amazing, inspirational and showed the depth of her character. While she and Lawrence resided in La Junta, Colorado for several years, she was involved as a member of the Altar Society at Our Lady of Guadalupe Parish. She also gave generously to the Paralyzed Veterans of America and to St. Jude’s Hospital. Celia is survived by two sisters, Hortencia V. Rodriguez (Ordway, Colorado), Enriqueta Vasquez (San Cristobal, New Mexico), her brother Juan Vasquez (Lakewood, Colorado), sons Charles (Josie), George (Clara), Martin (Joyce), grandchildren Michael, Veronica, Jorge, Cecilia, Lawrence, Rebecca, Thomas and numerous great-grandchildren. She will be remembered by her family and friends for her quiet demeanor, fun-loving spirit, determination and her beautiful smile.

Celia V. Rangel, age 95, of Denver, Colorado, had a peaceful passing on Friday, March 4, 2022 at the home of her eldest son, Charles (Carlos) and his wife, Josie Rangel. Her second eldest son, George (Jorge) and his wife, Clara Rangel, were... View Obituary & Service Information

The family of Celia Vasquez Rangel created this Life Tributes page to make it easy to share your memories.