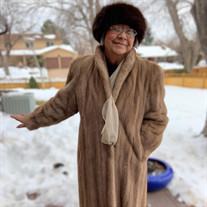 Not sure what to send?

Maria Celsa Teresa Vialpando Many have said, dad was “the rock” of our family and mom was “the heart,” so it was. Born with an strong sense of curiosity, mom had to know as much as she could about everything. When she couldn’t go to first grade because her birthday came too late in the year, she would walk to school with the rest of the kids then run home to read a set of books her father had brought home called, “The Books of Wonder.” In their passion for learning mom her father were much alike. Being an avid reader fed her appetite for knowledge and led to her becoming a teacher. Encouraged and financed by her mother she attended Adams State College where she majored in elementary education. Her intellect and beauty caught the eye of a young, soldier recently returned to Adams State from the Korean War. As Joseph registered for the fall semester mom came into the registar’s office to switch a class. Their eyes met and the story began. After marrying “the love of her life,” they both graduated from Adams State College. Teaching first in Chama, CO and then moving to Denver to teach in the Aurora Public Schools. Both served for thirty plus years in public education before they retired. Mom continued to support her Alma mater through the years and later created the Joseph Vialpando Ganas-Scholarship Fund to help future students attend Adams State College. The Catholic orphanage in Denver brought into their lives two precious daughters, Michelle and Nicole. Now a mother, mom began a new chapter in life which resulted in more learning. Mom often said, “Necessity is the mother of invention!” I think she was the necessary mother God invented for us. She enjoyed her new role as “mother” as she always dressed us to the T and provided us with many good learning opportunities as she encouraged all our endeavors in life. There were no strangers in mom’s world. If she could adopt two little girls she could adopt you too. When you crossed her path, you were expected to open up your life like a book and share the secrets of what makes you, you! If she ran into you again later she still remembered your story and more than often your name and birthday, as well. She had a flair for remembering dates. Generosity was her specialty, for mom couldn’t resist the desire to give to all. Friends, neighbors, relatives, anyone who personally served her in any capacity received a reward of some sort. Her “thank you” left her lips and her beautiful hands. As grandchildren came along she found herself rich with a different kind of treasure, one she enjoyed immensely for grandchildren were the jewels in her crown. She became many things to each of them. Some called her “Grandma Gum.“ Others called her, “Grandma can you bring dough-no’s?” Whatever it was she never ceased to deliver. They delighted in the belief that there would always be a Toosie Pop waiting for you before you walked out the door. Family traditions were cherished and practiced like clockwork. Mom made sure of that! Many birthdays were celebrated at Golden Corral where dad would play the harmonica and mama would sing Las Mananitas for all of Golden Corral to hear. If you lived too far away, the day didn’t pass without a birthday-phone-call from grandma and grandpa. This tradition even extended beyond the immediate family. For many years we spent the week before Christmas in Vail. What wonderful wintery memories. Every summer vacation was spent traveling this great nation. By the time we were done 48 states had been seen, often with one of her brother’s joining us. Many trips were made to come see you, no matter the miles. Their devotion to family was seen in their dedication to stay connected. Always seeing us off at the driveway, blowing kisses and a car-honk, “see you later,” as they drove away. The road of memories is long and full. Mom loved sports, especially her beloved CU Buffs and Denver Broncos. This summer she was thrilled to personally attend an Astros’ game at Minute Maid Park in Houston, TX. She often collected team posters and anything note worthy found in her Denver Post. These were proudly displayed in the house or garage and sent to other loyal family fans. Receiving a letter or package in the mail was another reminder she was constantly thinking of you. With each new great-grandchild born, mom had a new reason to shine. She was determined to be their favorite. Being the great-grandma of her 21 grandchildren was the source of some of her proudest moments. Most importantly, her life was deeply influenced by her God. Her upbringing taught her there is a God and His hand was in every part of living. Often times she was perplexed by His dealings with man and this promoted many spiritual conversations. She often credited her mother for her faith and teaching her the importance of prayer. Marrying dad was her proudest accomplishment. Since dad’s passing there were many questions about death and what happens when we die. Her battle with depression was a heavy burden she struggled daily to carry. The Lord heard her many pleas to leave her world of sadness. He has called her home. She left all this behind and has gone on the road to eternity. We honor her in accepting her wishes, though it breaks our hearts. Her love for us is left behind in every good memory. Smiling was her signature. Let us smile as we remember the person she was to each of us. Her latest personal note to herself stated, “Kindness is the greatest gift!’ Let her kindness to you be the gift you share with others. ***Family is asking in lieu of flowers donations be made to the Venmo app @Joseph Vialpando Ganas-Scholarship Fund. Or contact Michelle Fox for further details.*** **

Maria Celsa Teresa Vialpando Many have said, dad was &#8220;the rock&#8221; of our family and mom was &#8220;the heart,&#8221; so it was. Born with an strong sense of curiosity, mom had to know as much as she could about everything. When she... View Obituary & Service Information

The family of Celsa Vialpando created this Life Tributes page to make it easy to share your memories.

Send flowers to Celsa's The Viewing & Formal Greeting of the Family.