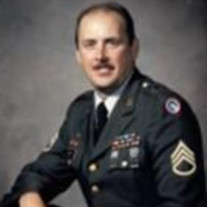 Curtis Elston West February 26, 1956 ~ August 13, 2021 Curtis E. West passed over in his home on August 13, 2021 in Aurora, Colorado due to complications following liver cancer. He was (65) sixty-five. Curtis was born on February 26, 1956, and at the age of (4) four was adopted by Helen and Clyde West. He was one (1) one of twelve (12) twelve biological and adopted children. Five (5) five brothers: Perry, Dan, David, Chuck and seven (7) seven sisters: Mary, Becky, Sherry, Kathy, Anneta, Clydia and, Althea. Curtis loved magic as a teen and worked alongside his sister, Clydia's husband Dennis, who was employed with the Barnum and Bailey circus. Later in life, Curtis would do magic at party events and during his career with the United States Army. Curtis enlisted in the Army at the age of (24) twenty-four and his first assignment was the de-militarized zone aka DMZ between North and South Korea. Throughout Curtis' military career he was stationed in Korea, Missouri (where he met Susan, his wife), Germany, North Carolina, Kentucky and Iraq (being a part of Operation Desert Storm) before being Honorably Discharged in May of 1996. Afterwards Curtis became a long time auto salesman for Marks Auto Sales in Colorado. From September through November Curtis passionately collected toys and donations at Mark’s Auto Sales for the annual Children’s Hospital Toy Run. After collecting a large haul of toys he participated in the group motorcycle ride on his Harley Davidson, with his son Jesse (who preceades him in death), to the Children’s Hospital in Aurora where the toys were delivered to the young patients. He was featured in a Denver Post article in 2018 for his annual efforts of paying it forward. Curtis was an avid collector of knives, coins from all over the world, magic and Harley Davidson memorabilia. He enjoyed time with family, grandchildren and friends at Sturgis, camping, fishing trips and travel in general. Curtis was a patient and supportive teacher to all who he encountered as well as a loving father, brother, husband and grandfather. Curtis is survived by his wife Susan West(Howard), sons and wives: Malcolm and Reagan, Kyle, Nanette (wife of Jesse, deceased), and Bryce along with (5) five grandchildren: Camrynn, Calum, Liamh, Grayson and Rory. Military Honors and Celebration of Life Memorial Service, Friday, September 17, 2021, Family will be receiving Family and Friends at 10:00am, Military Honors will be rendered at 11:00am, with Memorial Service to follow; Romero Funeral ~ Chapel of Repose, 15150 E. Iliff Ave, Aurora, Colorado. Curtis will be interned in a private ceremony on October 15, 2021 at at 2:30p.m. at Fort Logan National Cemetary, Staging Area "B" with full military honors.

The family of Curtis E. West created this Life Tributes page to make it easy to share your memories.

Send flowers to the West family.