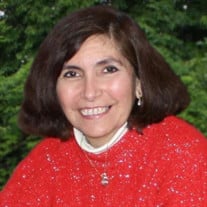 Deborah "Debbie" Rojas was born in Denver, Colorado to Joseph and Evelyn Hurtado on June 23rd, 1954. She entered into Eternal Life in Centennial, Colorado on December 6th, 2021 at the age of 67. Debbie was preceded in death by her husband, Berardo Rojas, and father, Joseph Hurtado. We are sure they are together again now. She is survived by her children, Roman Rojas, Leslie (John) Pacheco, and Robyn Trace. Her grandchildren, Johnny Pacheco, Jacob Pacheco, Logan Trace, and Michael Trace. Her mother, Evelyn Hurtado. Her siblings Jerry Hurtado, Diana (Gene) Marin and Ruthann Hurtado; and numerous nieces and nephews. Those who knew Debbie knew she had a personality that could light up a room. She loved to tease and joke and was prone to mischief, which is why she was so much fun to be around. On Sundays, after church, you could find her watching her beloved Broncos with a bowl of her homemade guacamole and a glass of Pepsi with the ice just right (or a Margarita if she could get her hands on one). She loved to talk on the phone with her family and friends for as long as she could. She was also the best grandma anyone could ever ask for. She shared so many things with her grandchildren: homemade desserts, numerous nerf battles, bouncing on the trampoline, stories and game nights, her love for Disneyland and beating everyone at WII bowling. She never missed a performance, or a game, she was their biggest fan. After being diagnosed with Multiple Sclerosis when she was 30, she still did all she could everyday for her children, and later, her grandchildren. She never let the wheelchair or her pain stop her. She was diagnosed with Covid-19 in Nov 2020 which exacerbated her MS. She battled extremely hard, and though the doctors only gave her a few months to live, we were blessed with an extra year with her. Mom loved proving them wrong. She never let anyone know how much pain she was in everyday and she always had a smile on her face. She was the strongest and bravest person we will ever know, and we pray that she knows how much she was admired for that. She suffered so much here on earth, but her faith stayed strong, and we know she is in heaven now watching over us. The family wishes to extend our sincere thanks to all her caretakers, doctors and nurses, who not only helped her, but became family to us all. When she left us to start her next adventure, she was surrounded by her family. Her laugh, her stories, and her love will be with us all forever.

Deborah "Debbie" Rojas was born in Denver, Colorado to Joseph and Evelyn Hurtado on June 23rd, 1954. She entered into Eternal Life in Centennial, Colorado on December 6th, 2021 at the age of 67. Debbie was preceded in death by her husband, Berardo... View Obituary & Service Information

The family of Deborah Rojas created this Life Tributes page to make it easy to share your memories.

Deborah &quot;Debbie&quot; Rojas was born in Denver, Colorado to Joseph...

Send flowers to the Rojas family.