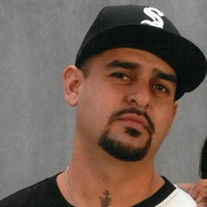 Demitre Leon Baca Sr. (Meech) was born to Loretta Rodriguez and Jose Baca on October 16th, 1978 in Denver, Co. Demitre was preceded in death by his late wife Susan Baca, Grandparents, Virginia & Daniel Rodriguez/ Madeline Correll & Max Baca . He was survived by his brother Damion Baca. His two children A’layjah Baca and Demitre Jr. Baca, one Biological grandson, Demitre Baca the III, and five step grandchildren, He was surrounded by a family with a great number of cousins, aunts, & uncle. Meech maintained to keep many homies. Including his late ride or die childhood friend Teddy Gruele (TEDDY BEAR) and far too many homies to mention by name, but you all know who you are. Demitre lived a happy go lucky lifestyle who rolled with the flow. Receiving his formal education in Denver, Co and attended Forest Elementary, Merrill Middle School, & John F. Kennedy. Growing up, Demitre played and ran the Curtis/Mestizo Park. At a very young age one of his favorite hobbies was to swim at the pool. Teaching himself to swim like a fish. Athletic as he was, having the drive to join a local swim team, began the start of him becoming the community pool Lifeguard. Demitre was as his grandma Virginia would say, “A LOVERRR BOY”. After so many childhood girlfriends and crushes. He soon married his wife Susan Baca of eighteen years. Word on the block was that he was that cool, friendly, polite, people person that would always have your back. He was a man that grooved with “all the jams”; he was not picky in his music collections. He was always giving all that he could to everyone, even if that was taking the shirt off his body to keep you warm. You always knew that Dimitre would fight for you, stand up for you, and that he had your back to the fullest. He was a one of a kind O.G., with the left hand hitta quitta; keeping record of every K.O. and rounds of a fight. Demitre will forever share the same homecoming as his grandma Virginia Rodriguez on Valentine’s Day. Demitre passed on February 14, 2022.

The family of Demitre "Meech" Leon Baca Sr. created this Life Tributes page to make it easy to share your memories.

Send flowers to the Baca family.