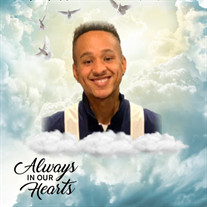 Derek Eugene Hawkins, II also known as D’zel was born on October 28, 1996, in Beaufort, South Carolina to Derek Hawkins and Felicia Savage Hawkins. He departed this life on May 22, 2021, fulfilling his purpose here on earth. Derek was educated in Denver Public Schools and was an exceptional student. His education began at Marrama Elementary, Knight Academy, Omar D. Blair Elementary, and Florida Pitt-Waller. His high school years were spent at East High School as a proud East Angel graduating with honors. While at East, Derek participated in Project Greer Street, AVID, Angels for AP Excellence, and as a freshman, was part of the JV wrestling team. He then attended Arizona State University, and graduated with a Bachelor of Science in Law & Public Policy with an emphasis in Business Management. Derek was a very kind, personable, fun-loving and social person. He participated in several community and civic activities some of which included being a Beau in the Denver Chapter of Jack & Jill of America, interning with the Tempe Parks & Recreation where he ran the Tempe Play Mobile program, and interning with the City of Denver’s Office of Economic Development. Derek had a passion for helping everyone, which was evident in his love for people, and his impact was enormous. Derek never met a stranger and treated everyone he encountered, with the utmost respect and humanity. His smile would light up every room he walked into and would warm your soul. His heart was golden and authentic. He was loved and admired by his teachers and classmates from elementary to college, and his absence will leave a huge void in many hearts. Derek at a young age, was indeed a Renaissance Man. Not only was he academically astute, but he was also well dressed, an entrepreneur and had hobbies which included golf, painting, and paddle boarding. Prior to his transition, Derek began his adult career as a part of Xfinity’s Market & Development Team. Derek spent the last hours of his earthly life enjoying life on the lake paddle boarding with his friends. Derek leaves to cherish his memory, celebrate his life, and love him forever, his loving and devoted parents, Derek E. Hawkins and Felicia Savage Hawkins, his fiercely protective and loving sister, Deja Hawkins; beloved Godsister, Sanaa Vermont; grandparents, Robert (Joyce) Savage, Rosie Martin-Savage, Bernie Ruvalcaba and Douglas Coleman; great-grandmother, Frances Savage; uncles, John Ruvalcaba (Vanessa), William (Lisa) Savage, Robert (Donnesha) Savage, Joseph Savage, and Mark Treadwell; aunts Michelle (Nathaniel) Liles, Courtney Coleman, Crystal Coleman, and Tiffany Coleman; Godmother, Jenean Davis; Godfather, Devin Romero; Best friends, Daylen Bowen and Jaleel Lawson; Godson, Daylen (Deuce) Bowen II; a host of cousins, friends, neighbors, and classmates. Please follow the link to access Live stream service. https://www.youtube.com/channel/UCwWV7yhsXbaj9BAST-S0A-Q

Derek Eugene Hawkins, II also known as D&#8217;zel was born on October 28, 1996, in Beaufort, South Carolina to Derek Hawkins and Felicia Savage Hawkins. He departed this life on May 22, 2021, fulfilling his purpose here on earth. Derek was... View Obituary & Service Information

The family of Derek E. Hawkins II created this Life Tributes page to make it easy to share your memories.

Send flowers to the Hawkins family.