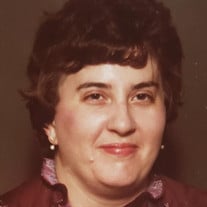 Diana Lee Eads July 21, 1951 ~ May 16, 2022 It is with extreme sadness that we announce the passing of Diana Lee Eads, beloved wife and mother, on May 16th 2022 in Denver Colorado. She was 70 years old. Diana was born in 1951 in Denver, Colorado to Betty Jean and Sherman Caldwell. She graduated from Byers High School in 1969. After school she began working in restaurants, which is where she met her soon-to-be husband Jerry Eads. After leaving the restaurant, she moved her career into clerical work until she decided to start her own business in 1986 after the birth of her daughter. She opened her own daycare, Diana’s Ducklings, which she successfully ran for eight years. In 1995 she decided to go back to school and achieved her associates degree as a paralegal, graduating at the top of her class. She began her paralegal career working with a noted criminal attorney and remained in the legal field until her retirement in 2002 Diana married her soulmate and best friend, Jerry, in 1969 and enjoyed 53 years of marriage. They were blessed with the birth of their daughter, Bobbie, in 1984. She and Jerry began traveling soon after, visiting the historic sights in many states. Diana enjoyed scrap booking, knitting and crocheting all while spending time with her beloved dogs. In her later years she and Jerry collected classic movies and television series. She and Bobbie also discovered a mutual love for Thai food. Diana is survived by her loving husband Jerry and her daughter Bobbie, her two adopted grandchildren Lily and Martin, sister Susan, brothers Lloyd and Tim as well as extended family and an abundance of friends. We will miss her more than words can say. A service will be held at New Hope Community Church on Tuesday May 24th at 11:00am followed by a prayer service at Mount View Cemetery at 1:00pm. In lieu of flowers, please consider donating to the Denver Dumb Friends League on her behalf. Her rescue dogs were one of the great joys of her life. New Hope Community Church 17699 E Hampden Ave Aurora, CO 80013 Mount View Cemetery 3724-3750 Kiowa-Bennett Rd Bennett, CO 80102

The family of Diana Lee Eads created this Life Tributes page to make it easy to share your memories.

It is with extreme...

Send flowers to the Eads family.