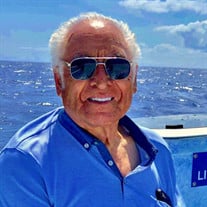 Diomar A. Sanchez, 91, of Wheat Ridge, CO passed away at his home surrounded by his loving family. Diomar A. Sanchez, “Delmar”, or “Del”, was born February 19, 1930, in Seguin Texas. Diomar is the son of Santos and Estanislada Sanchez. Diomar is survived by his daughter Yolanda Gonzales, (Daniel Gonzales), Esther Vigil, (Sam Vigil), his older sister, Adelmira Hernandez, and his younger brother Santos Sanchez Jr. His grandchildren, Melynda Esther Archeleta, (Jeromy Archuleta), Chanryka Jean Lucero, (Danny Lucero), Jeremy Gonzales, (Andrea Gonzales), Sam Vigil Jr. (Alisa ), Shawn Isaac Vigil, (Aspen Sojo), and Jaren Jacob Vigil. His great grandchildren, Morgan Archuleta, Victoria Mata, (Adrian Mata), Monica Gonzales, Avenancio Aragon, Alex Archuleta, Jade Archuleta, Ariana Gonzales, Nikko Gonzales, and JennaBella Lucero. Three Great-great-grandchildren, Adelyus Lynn Dunsmore, Laila Yontz, and Meah Archuleta. Diomar was preceded in death by the love of his life Cora R. Sanchez, his parents, and numerous brothers and sisters, as well as brother and sister-in-laws. Diomar was taught and followed the steps of his parents and was a very devout Christian husband and father. He served in the United Stated Air Force, and was given an honorable discharge because he had a few fainting spells. He had a good time in the service and was thought to be the Captain, and had a good time pretending. (The stories he told were so funny!) His parents taught Diomar the real meaning of prayer and just as he found his mother praying for him when he came home on furlough, he prayed for all the family by name daily. His morning routine; get up, make his bed, bathe, shave, come to the family room kneel down by his recliner to pray, and then make his coffee and sit and read his bible while drinking his coffee. Diomar was a very devout husband and when his wife, Cora, became sick stayed by her side through it all. He took his vows very seriously and in good times and bad, sickness, and in health, he was right by her side until she took her last breath. He showed us what it meant to be a devoted spouse. He taught us the importance of being together as a family, and to forgive each other when we didn’t agree on things. He taught us that no one is more important than family, and he enjoyed being with all of us for our family gatherings. If you knew my dad at all, you know that he never had a conversation where he didn’t speak of the greatness, and importance of God. These last weeks while he was in the hospital he witnessed to every nurse, doctor, and hospital staff personnel that entered his room. He told them they needed to get ready because there are only two places you will go. He told them, you can go to heaven, or you know, the other place, and you surely don’t want to go there! Diomar would tell you today, I am no longer here with you, but if you serve the Lord as I did with all my heart, we will not say goodbye but I’ll see you in the morning! Diomar entered eternal life on March 8, 2021 at 2:45 p.m. and was greeted by his Lord and Savior, and his beautiful wife Cora at the pearly gates. IT’S NOT GOODBYE, WE’LL SEE YOU IN THE MORNING!

The family of Diomar Arredondo Sanchez created this Life Tributes page to make it easy to share your memories.

Send flowers to the Sanchez family.