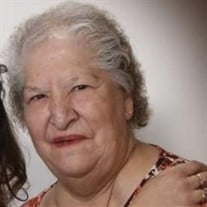 The family of Dolores Lorraine Archuleta (Montoya) is sad to announce her passing on Friday, June 25, 2021 at the age of 86 years old. Dolores was born on March 30, 1935, in Taos, New Mexico to Celina Cordova Montoya and Aron Amarante Montoya. Raised in Taos, with her five siblings, Dolores always maintained her love of southwest culture, green chile, pinon, and all things Native American. Her surviving sisters recall that she was always an independent child - a trait that would define her throughout her long life. Upon graduation Dolores relocated from Taos to Grand Junction, where she resided until she met and married Adolph Archuleta in Fruita, Colorado in 1955. They would go on to have three children, Diane, Mike, and Bob. After their separation, Dolores and her children moved to Denver, Colorado, where she established the rest of her life, in the city that she loved. It was in Denver that she found true happiness, whether that was while dancing the night away at one of Denver's local night clubs, or while rubbing elbows with Denver's finest during her 40+ years waitressing, or while spending time with her beloved family at various weddings, birthdays, showers, or communions; it can't be argued that Dolores was happiest when she was congregating and sharing memories with others. Dolores lived her life, on her terms. Forever an independent woman, she passed from this Earth in much the same way. On her terms, in the city that she loved, with the people that she loved. She will be forever and eternally missed. Rest easy, Dee and thank you for all that you did. Dolores was preceded in death by her mother Celina Cordova, father Amarante Montoya, step-father Dewey Struck, sister Rebecca "Becky" Toppett, brother Amarante "Andy" Montoya, husbands Adolph Archuleta and Leopoldo Pena Ramos, and son's Michael Adolph Archuleta and Robert Ernest Archuleta. She is survived by sisters Beatrice "Bea" Montoya (Dave), Rosie Trujillo (Pablo E.), and Patricia "Patsy" Torres (Vicente), daughter Diane Christina Zubia (Jaime), daughter-in-laws Diane Sisneros and Renee Archuleta, grandchildren Michelle Archuleta, Andrea Delgado, Michael Archuleta, Serena Archuleta, Diana Zubia Rae, Danielle Archuleta, Jaime "JJ" Zubia, Ashley Sisneros, Robert Archuleta Jr., and various great-grandchildren, adopted-in-spirit granchildren, nieces, nephews, and random neighbors, customers, and friends. A viewing and reflection is scheduled for 9am-10am at Romero Family Funeral Home at 4750 Tejon St., with service beginning at 10am until 11am.

The family of Dolores Lorraine Archuleta (Montoya) is sad to announce her passing on Friday, June 25, 2021 at the age of 86 years old. Dolores was born on March 30, 1935, in Taos, New Mexico to Celina Cordova Montoya and Aron Amarante Montoya.... View Obituary & Service Information

The family of Dolores Lorraine Archuleta created this Life Tributes page to make it easy to share your memories.

The family of Dolores Lorraine Archuleta (Montoya) is sad to...

Send flowers to the Archuleta family.