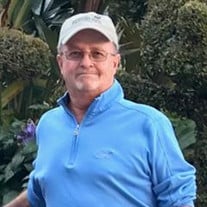 Beloved Donald Joseph VanBuhler Jr. passed away peacefully with his family by his side on Friday, March 4, 2022 in Colorado at the age of 75 after a valiant and brave battle with cancer. Don was born in Michigan but became a Colorado native when his parents moved to Denver when he was less than a year old in 1946. He graduated from St Francis de Sales high school in Denver. He was proud of his 6 years of service in the US Navy on the destroyer USS Sample, along with his graduate and undergraduate Degrees at the University of Colorado Boulder. Don enjoyed a successful career at Coors Brewing (in fact he loved being called the “Beer Man”). He was an accomplished piano player and dabbled in painting (many of us have some of his “works of art”). In his younger years, Don was a golfing and snow skiing enthusiast, and in his older years, he loved taking luxury cruises with his wife Toni or a sunny afternoon drive with the convertible top down for Happy Hour. In his retirement, he and his wife Toni spent their summers in Littleton, Colorado, and his heart was at their beautiful home in Oro Valley, Arizona with their close friends and warm winters each year. Those who knew Don best, knew he could be a prickly pear at times, with a soft, loving center. You could always count on Don to shoot straight in a conversation and tell it like it is. (We loved this about him.) In fact, he did have a love for politics too. When his sister asked recently if he was going to watch Biden’s State of the Union Address, he said “I think I’ll watch cartoons”. Don was greeted in heaven by his parents, Donald and Joana VanBuher. Don is survived by his dearly beloved and devoted wife Toni, sister Paula (Tom), son Bill (Gen), two daughters Becky (Drew) and Desiree (Scott), and grandchildren Dylan, Chase, Hailey, Keri, Bree, Charlie, Nora, and Will. He absolutely loved being a “Papa” to his grandchildren. Family and friends are devastated to lose Don, but we are comforted that he is at peace after many years of bravery persevering through chronic health and pain issues. We expect that his first stop in heaven was to tee off at the big golf course in the sky with a cold Coors beer in hand while whistling Neil Diamond’s “September Morn” with his dogs Clover and Bogie by his side. Funeral services will be held on Thursday, March 31st at 10:00 a.m. at All Souls Catholic Church, 4950 S Logan St., Englewood, CO 80113. Following the church services burial at noon at Fort Logan Cemetery, 4400 W. Kenyon Ave., Denver, CO 80236. A Celebration of Life will be held at 1:00 p.m. at Raccoon Golf Course, 7301 W. Bowles Ave., Littleton, CO 80123 In leu of flowers, the family is suggesting a donation to the American Cancer Society. https://donate3.cancer.org/

Beloved Donald Joseph VanBuhler Jr. passed away peacefully with his family by his side on Friday, March 4, 2022 in Colorado at the age of 75 after a valiant and brave battle with cancer. Don was born in Michigan but became a Colorado native... View Obituary & Service Information

The family of Donald Joseph VanBuhler created this Life Tributes page to make it easy to share your memories.

Send flowers to the VanBuhler family.