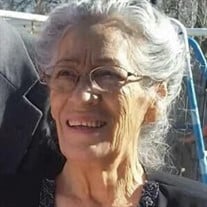 On August 27, 2021, Engracia Arellano, exceptional wife, mother, grandmother, great-grandmother, and virtuous woman passed away peacefully at age 81. She was born on April 16th, 1940, although her legal birthday was listed as May 10th, 1940 On February 21, 1958, she married her lifelong love, Jose Jesus Arellano, together they raised 7 children, Dora, Gloria, Gerardo, Rosanna, Jose, Hilda,and Ricardo. They also adopted one of their great-grandchildren, Carlos Jesus Arellano,at the age of one week, and raised him as their son. In her younger years, she worked several jobs including seamstress, and as a young mother, she made clothes for her children and continued to enjoy doing this throughout her life. She cared deeply for not only her family but also her neighbors and people she felt needed more than just a welcoming smile. You would find her always feeding everyone and offering to pray over them to ease any pain, anguish or suffering. Even in her final days, she would ask if you had eaten and you could hear her name people as she prayed for every individual in her family. She was always testifying and talking to everybody she saw about God, the bible, and inviting them to church. She was passionate about sharing God’s plan for salvation. She did this because of who she was, selfless, giving, compassionate and virtuous. She was always the first to offer help. Some of the early memories of her were going door to door collecting money in envelopes from friends and family for someone in need. Making sure to list names and amounts so the giver and receiver felt special about both giving and receiving taking time to speak with everyone. She had a special place in her heart for nature and loved gardening. Roses being her favorites. She loved watching the sunrise from her window and looking out into the garden with a gentle sweet smile coming across her face as the sun with its rays touched the top of the flowers and trees that she nurtured and seeing the birds as they flew around. These are just some of the special memories we will hold in our hearts for such a special woman. Engracia is preceded in death by her two brothers and a sister: Joaquin Garcia, Fidel Garcia, Maria Gonzalez She is survived by one brother, Isaac Garcia, as well as her husband, Jose Jesus Arellano, their children, and numerous grandchildren and great-grandchildren. Children: Dora Arellano, Gloria Arellano, Gerardo Arellano, Rosanna Herrera, Jose Arellano, Hilda Arellano, Ricardo Arellano Grand Children: Frank Herrera, Delilah Herrera, Gabriel Herrera, Alfredo Estrada, Sylvia Estrada, Lisa Estrada, Victoria Arellano, Jennifer Arellano, Luis Arellano, Miguel Arellano, Brittney Herrera, Cristian Herrera, Jesse Arellano, Jovani Arellano, Jazmine Arellano,Noah Sanchez, Karl Buehler, Daniela Arellano, Marissa Arellano, Devina Arellano, Santos Arellano, Carlos Arellano, Juan Arellano and numerous great-grandchildren.

On August 27, 2021, Engracia Arellano, exceptional wife, mother, grandmother, great-grandmother, and virtuous woman passed away peacefully at age 81. She was born on April 16th, 1940, although her legal birthday was listed as May 10th, 1940 On... View Obituary & Service Information

The family of Engracia Garcia De Arellano created this Life Tributes page to make it easy to share your memories.