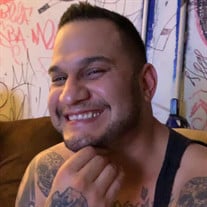 It is with great sorrow to announce that Frank Joseph Hernandez, left this world unexpectedly, at age 38 on Thursday, August 12,2021. Born at Lutheran hospital in Wheat Ridge, Co. March 15, 1983. He attended Sabin Elementary school and John F. Kennedy High School. Frank, loved Baseball (Boston Red Sox), Music, Cars, Fishing, the Outdoors, Camping, watching Movies with blaring Surround Sound, and finally Cooking (exquisite Chef) on the Grill in his backyard, he loved to light a Fire Pit just sitting in the back or front yard with his Spouse, Children, and Parents. Those who knew our Son Frank, even just a little, know he took a little part of your heart with him. Family was the pivotal essence of Frank's life. One of his Tattoos was the initial FAC (FAMILY ALWAYS CONQUERS). A wonderful encounter for our Son was meeting his future wife, Jazmin. They both met while working at RMO in 2014. They married on June 11th, 2018. Both being nervous, Kathy found out by finding the Wedding Certificate in the China Cabinet. Frank & Jazmin finally told me on Christmas Eve of the same year. They were inseparable cherishing every moment they had together. Frank told Jazmin when proposing to her that he would like to have a life together just like his Mom & Dad. God bless you Son rest in peace. Life's Journey was very challenging for our Son. Many obstacles were thrown his way. He fought hard, never giving up. He would fall and lift himself up. His perseverance in living despite the hellish state he encountered on his endless journey down the road of life. He beat death at its own game many times. His Mom always said, Frank has nine lives. His Guardian Angel was with him on his journey. Frank, was tired now and he couldn't fight anymore. Someone told me, that while Frank was sleeping, God came and took our Son up to heaven where he is in peace. Frank, loved animals! He had a Snake, Gecko, Fishes, a Tortoise, which Frank said would out live us all, how Ironic. Frank and his spouse Jazmin, they secretly kept a Gerbil not telling his mother. Frank and his loving dog BRONX had an unbelievable relationship. Their love for each other was mutual. When watching Frank and Bronx play together was priceless. Frank, will be missed everyday survived by his wife Rocio Jazmin Hernandez, Children Nancy, Angelina, Santino, Brooklynn, Stepsons Alvin, Edwin, and Isaiah, Stepdaughter Mariah, Father Joseph Hernandez, Mother Katherine S. Hernandez, Sister Brittania J. Hernandez Her husband Tim Orozco, daughters Alyiah and Isabella, Grandson Jax Joseph Hernandez, Godfather to Alyiah Orozco , Godmother(Auntie) Priscilla Ibarra. Fondly remembered by his many Uncles, Aunts, Cousins and many friends. Frank was preceded in death by his Grandparents Frank & Hilaria Garcia, Grandparents Joe & Nellie Hernandez, Godfather Ralph E. Garcia, Aunt Margie (Garcia) Montoya, and Cousin Ryan A. Garcia. In Memory of Frank Joseph Hernandez there will be a Mass held: On Thursday September 2nd, 2021 11:00am, at All SAINTS CHURCH 2559 S. Federal Blvd. & ( S. Grove St.)

It is with great sorrow to announce that Frank Joseph Hernandez, left this world unexpectedly, at age 38 on Thursday, August 12,2021. Born at Lutheran hospital in Wheat Ridge, Co. March 15, 1983. He attended Sabin Elementary school and John... View Obituary & Service Information

The family of Frank Joseph Hernandez created this Life Tributes page to make it easy to share your memories.

It is with great sorrow to announce that Frank Joseph Hernandez,...

Send flowers to the Hernandez family.