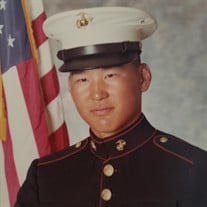 Gerald Kiyoshi Hirai Gerald Kiyoshi Hirai, 69, unexpectedly passed away Friday November 19, 2021, at his home in Denver, CO. Gerald was born November 30, 1951, in Chicago, IL to George and Evelyn Hirai. Gerald loved to play his guitar, listen to music, watch concerts on T.V., watch sports and party. He was drafted into the United States Marine Corp. in 1972 and was happy to go, he served until being honorably discharged in 1973. Gerald then got his commercial truck driver’s license and drove for a while until the early 1990’s. Gerald was blessed with a daughter in July of 1988. In the early 1990’s he moved to Denver, Colorado to spend more time with his daughter and worked in retail and stocked shelves and for a while he also worked in liquor stores stocking shelves as well. For the last three years of his life, he lived with his daughter, son-in-law and three grandchildren. Gerald is survived by daughter JoVanna, son-in-law Fabian, grandchildren Fabian, Enoch, Lilianna, Father George, brother Steve, sister-in-law Karen, nephew Derrick, family, and friends. He was preceded in death by his mother Evelyn and stepmother Louise. Visitation at 1 PM and servicesat 2 PM Friday December 3, 2021, at the Romero’s Family Funeral Home 1805 S Sheridan Blvd. Lakewood, CO 80232

The family of Gerald Kiyoshi Hirai created this Life Tributes page to make it easy to share your memories.

Send flowers to the Hirai family.