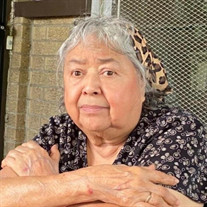 Gloria was born in Denver, Colorado to Manuel Rodriguez and Ruth Arroyo. She graduated from Annunciation in 1961. She married Ronald Nuanez on July 27, 1963. She is preceded in death by her parents Manuel Rodriguez and Ruth Arroyo; brothers Manny, Danny, Wayne and Danny Rodriguez; in-laws Hank and Eva Nuanez, and numerous uncles, aunts and cousins. Gloria is survived by her husband, Ron, her children, Ronald, James (Sabrina), Letitia (Mike), Paul and Felicia; her (15) grandchildren Tysha (Ray), Darian, Briana (Jon), Jordan, Krystle, Paul, Brandon, Holly (Alex), Amber, Jalen, Enrique, Dylan, Alyssa, De’Angelo, and Vinny; her (4) great grandchildren Olivia, Janessa, Christian, and Gracie.; her son in law Ramon; her siblings Dolores Rodriguez, Manuel Portugal, Judy Gallegos, Joyce Ortega and Betty Rodriguez; her Aunts Carmel Belo and Mary Chavez and Uncle Robert Rodriguez. Gloria was gracious, caring, and courageous, but most of all she was a woman of faith. She loved the Lord and her family dearly. Throughout her time with us, her creativity illuminated our lives with her beautiful creations with ceramics, cake decorating, crafts, cookies, candy, and various types of art. She always went above and beyond for every celebration. She would cook and bake for days. In fact, most of the comments we have received since her death have been about her cooking and baking, with people saying she was the “best cook” and they “enjoyed all her food”. After high school, Gloria started her career working for the State of Colorado. A year later she married her husband, Ron. She worked until her first son, Ron Jr. was born and then she started the most important career of her life as a mother. Shortly after Jim came along and then Letitia. There was a short break and Paul was born then two years later Felicia arrived. Gloria wanted only the best for her family. She wanted to send her children to Catholic school and sold Tupperware to support her kids' education. When she became a grandma, she loved telling stories to her grandchildren and they loved listening to her stories and learning the many things she shared and taught them. During Gloria’s career she worked various jobs including cooking for the Stock Show, catering, and the airlines. She baked and sold decorated cakes including wedding cakes, cookies, and candies. She was also a salesperson selling Tupperware, Avon, toys, and the ceramic crafts she painted. Her last job was as a courier for Hospital Shared Services. She helped supplement the income in many creative ways! Gloria was a very giving and compassionate person; always thinking of others before herself. At Christmas time, she cherished giving gifts and sharing the joy of Jesus. If you called to ask if a friend could come by for Christmas dinner, she made sure she had a gift for them to open. She would bring people she met to the house that did not have means for supper. When they left, they were sent with a care package of food and supplies. She even paid for their hotel stay. She always made everyone she met feel welcomed and important. She touched so many people’s lives. Gloria endured so much during her last years but was courageous through them all because of her faith in our Lord.

The family of Gloria Jean Nuanez created this Life Tributes page to make it easy to share your memories.

Gloria was born in Denver, Colorado to Manuel Rodriguez and Ruth...

Send flowers to the Nuanez family.