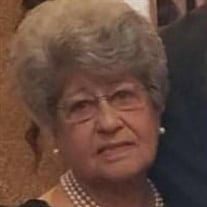 Ida Vialpando October 14, 1938 ~ June 26, 2021 Ida Vialpando (Romero), 82, of Aurora, Colorado Formerly of Rocky Ford, passed away on June 26th in Parker, CO With Loving Family at her side. Rosary will be Recited July 9th at 10:00 A.M. St. Peter’s Catholic Church, 1209 Swink Avenue Rocky Ford Colorado. Mass of Christian Burial to take place immediately after and Burial will take place at Valley View Cemetery, Rocky Ford, CO 81067 where she will join her late Husband Santiago (Jim) Vialpando. Arrangements are by being entrusted to Romero Funeral Home, Aurora, CO. Ida was born in Anton Chico, New Mexico to Cleofas and Aurora Romero on October 14th, 1938. She married Santiago “Jim” Vialpando in Rocky Ford. she worked as a caretaker for her mother until her passing, and then took on raising her Grand Children from the time they were born until she passed away (27 years). She spent time taking care of her flowers, Cooking and especially loved making tamales with her son and Grand Children. Ida was involved with St. Peter’s Catholic Church until she moved to Denver to be with her grandchildren after their Mother Passed away. Ida is preceded in death by her loving husband Santiago “Jim” Vialpando, her Parents Cleofas and Aurora Romero, Brothers Guillermo Romero, Benigno Romero, John Romero and Sister Carol Lucero. Ida is survived by children Jimmy (Norma), Russ, and Patricia (Yolanda), her siblings Steve and Ruby, her grandchildren Gina (Matthew), Joshua (Nichole), Horacio, Lucas, Nicholas, and great-grandchildren Xavien, Giana, Cruz, Rio. Pall bearers will be Kenneth Morman, Horacio Vialpando Jr, Frank Lucero, Joshua Vialpando, Michael Romero, James Romero, Matthew Williams. Memorials and Donations may be given to St. Peter’s Catholic Church, Rocky Ford, CO 81067. The family of Ida wishes to extend our sincere thanks to all who have extended sympathies and stories of the good times

The family of Ida Vialpando created this Life Tributes page to make it easy to share your memories.

Send flowers to the Vialpando family.