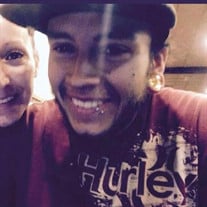 Issac Isaiah Ramon Lovato-Rivera 25 years young Born: August 6, 1996 in Denver, CO Passed into after life: April 1, 2022 in Lakewood, CO Issac was such a curious child, always wanting to learn. Issac had a heart that was uniquely genuine, compassionate. It’s easy to see why he was deeply loved by everyone including his “Grandpa John” whom took him under his wing at just a couple years old. Issac was his “little big man”, he would be out mowing the lawn at 4 years old, holding on the cross bar where the handle folds because he always wanted to help. Issac wanted to have fun and John always wanted to have fun with him. He was a wonderful father figure, teaching Issac manners and morals and encouraging his faith. This is where we believe Issac established his desire to help others. Young Issac was cautious and afraid to try new things. He was tricked by his mother into learning how to ride a bike. She followed him closely with her voice pretending to be holding onto the seat of his bike for stability but little did he know, she was just the voice behind him. Issac’s biking adventures didn’t stop there. He later began to help tune and build them with a small shop in Denver. Issac really got to know the mechanics of them and grew a passion for taking things apart to rebuild them. He soon was jumping ramps in the skate parks and became more daring. He even rode with his friend Anthony from Denver all the way to Colorado Springs! Issac’s dad, better known as Big Issac, would have him help with projects around the house. They loved hanging out together and doing a lot of tinkering. Big Issac had a love for lowriders and Issac loved to ride in his dads. They would work on the cars together. Big Issac would later surprise Little Issac with his first dirt bike as a pre-teen and so began his love to ride. There were numerous rides on trails with his friend, Dante and with Nadar occasionally riding on the back. For repairs and such, Issac would frequently call down to Steele’s Cycles to get any needed parts. The story goes, he was there so often he was eventually offered a job. Issac became a loyal and dedicated employee for 7 years. Issac continued to push the limits on many of his projects. From bikes to dirt bikes to motorcycles then leading to his true love, the AE86! He learned how to tear down the rear axels and weld the spider gears together to make for sick drifting! He loved going fast and racing anything including the RC 86. He loved being with his friends, camping and off-roading, shooting his many guns, listening to music from punk to EDM house and dubstep and more recently would enjoy sitting in his car with a new inspiration and shared new music. He loved riding in the mountains and just forgetting the world. Issac was a good friend, he was a good listener and made sure you felt heard. He always wanted to make sure everyone was taken care of and had eaten. He was always sure to bring anyone a smile if they were having a bad day. Issac had a close friend whose name was also Issac, yes, spelled the same way! This Issac went by the name “Thowed”. They would get together in Thowed’s garage and try the bigger projects like motor swaps and paint. The garage was home to many friends to visit and this is where he met Julisa. These two started spending a lot of time together and decided to become official in April of 2020. Julisa adopted his beloved cat, Woods and new friend, Theythem; a bearded dragon. Julisa’s daughter, Honesty loved trying to help Issac when he was working on his cars and fixing bikes. She wanted a bike of her own but it had to be just like Issac’s! He was more than happy to accommodate. Issac worked hard and played hard. He didn’t just think outside of the box, he lived outside of the box. He was excited about many things. Part of Issac’s passion was to help and teach people, he would love when anyone was excited to try the things he liked to do. Issac will truly be missed! Issac left behind his loving mother and father; Sia Lovato and Issac Rivera; his grandparents, Lawrence Rivera and Gail Corwin, Rudolph Lovato and Hortensia Rubio; his Aunt and Uncle, Jamie Lovato and Rudy Lovato; his cousins, Mercedez and Angelica Martinez and their children: Sebastian and Jackson and Bobby and Harper; and recent girlfriend, Julisa Corpuz and her daughter, Honesty; as well as an extensive list of those who watched him grow up into a caring, kind and gentle young man, and his numerous lifelong friends who were always stayed by his side. Memorial Services will be held at: Romero Family Funeral Home April 15, 2022 1805 S. Sheridan Blvd. 1-3pm Lakewood, CO. 80232 By the grace of God and the thoughtfulness and consideration of others with their generous donations, we have everything we need for Issac’s memorial arrangements. We ask that if you are looking to make a donation that you consider a charity that he would have supported, such as: a local animal shelter, a cat care society, food bank, bikes for tykes.

The family of Issac Isaiah Ramon Lovato Rivera created this Life Tributes page to make it easy to share your memories.