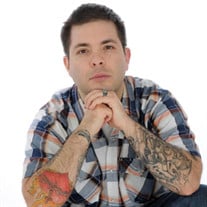 Musician. Artist. Song Writer. Vocalist. Rock Star. Many who knew James Patrick Belarde Jr knew him by one of these titles. Those who knew him best knew him as Son, Father, Grandson, Uncle, Nephew, Brother, God Father, Cousin, Bandmate and Friend. James was born December 28, 1977 in Denver CO, forty-three years before his death on June 22, 2021. He is survived in this life by his mother Tillie, stepfather Andy, father Jim, stepmother Madeline, sisters Stacey, Vail, Julie, Terre, brother Chris, their spouses and children and his grandmother Susan. Most importantly he is survived by his son Gabriel and soulmate Jenny. He is proceeded in life by his grandfather Jose, grandmother MaryJane and his twins that have been waiting for their first hug….. They need wait no longer. The proudest moment and crowning achievement of his life would have to be when his son was born. Being a father was his passion and he considered it to be the most important thing he could ever do. Fatherhood was his most cherished accomplishment and being a good father to his son was his first priority. James sometimes struggled, as all parents do, with the finer points of parenthood but stove to instill the best parts of himself in his son Gabe. His love for life and family will live on through his son. At a young age Jimmy knew how to engage the audience. He loved to perform for family and friends. He sought joy by bringing smiles to the faces of those he cared about. He would come alive on stage and this only grew as he became an adult. With his bands Stranded Alien, Kruked, N1LS and Guerrilla Radio, the artist known as Jimmy Inks played in local Denver venues such as Herman’s Hideway, Bluebird Theater, Summit Music Hall, Red Rocks and more. James loved entertaining people from all walks of life and bringing people together to celebrate that life. James’s gift was more then his ability to make everyone in the crowd feel like they knew him but his ability to make everyone in the crowd feel like he knew and cared about each and every one of them. For James, one of his most memorable moments came in 2001 when he was invited to go on a USO tour for the troops overseas. That tour came right after the 9/11 attacks and he and his band mates were on one of the first flights allowed out of Denver. This was only a small glimpse into how patriotic James truly was. He showed his support for active duty soldiers as well as the veterans by giving it all on stage at those shows. He preformed benefits when ever requested and never hesitated to reveal the light that we his talent. James, or Jimmy, as he was affectionately known, was passionate about a great many things in life and one of those things was community service. He was active in coaching little league sports. During his shows, he would give random kids a thrill by bringing them up on stage and making them feel special. James always believed that children deserved the best life had to offer. He also genuinely cared about animals and fostered a number of dogs for the Humane Society. His constant companions were his two terriers named Honey Bear and Treble. Together, they often wandered though life seeking peace in their hearts. In closing, James' struggles in life were not in vain. His ambitions as an artist, his desires as a father, his passions for the world around him were all just part of the complicated individual whom we all knew and loved. I'd like to stress the word "individual" here because he was truly unique and his contributions to all our lives won't soon be forgotten. Thank you and good bye, James. We love you. [James Belarde Jr leaves behind a legacy, his son. Gabriel is and always has been Jimmy’s love, pride and joy. The family ask in lieu of flowers, please, help us honor the extraordinary life of James by giving towards the scholarship fund for Gabriel. Donations received via [email protected] All PROCEEDS will DIRECTLY BENEFIT Gabriel. Thank you for helping us continue the plans that Jimmy has made for his son.]

The family of James Patrick Belarde created this Life Tributes page to make it easy to share your memories.

Send flowers to the Belarde family.