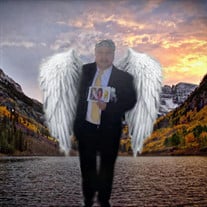 JOSEPH TOBIAS MARQUEZ JR- Joseph T. Marquez, 59, passed unexpectedly April 17, 2021 in Denver, Colorado. He was born July 10, 1961, in Denver, Colorado, the son of Joseph M. and Genevieve Segura (Alvira) Marquez. Joseph graduated from West High School, Class of 1979. Joe was an avid salesman who was able to sell ice to an eskimo. Joseph was a Golden Glove Boxer of Colorado for his hard work and dedication to boxing. Joseph had many hobbies including boxing, baseball, fishing, football, golf, and camping. Joseph T. Marquez was a man of inspirational sayings, especially amongst his children, grandchildren, nephews, and nieces, “Be a Leader Not a Follower,” “Be Aware of Your Surroundings,” and “We’re Some Bad Dudes.” following his parents Joseph Tobias Marquez Sr., Genevieve Segura (Alvira) Marquez, and Julio; Stepfather, Wanda Ellis; sister, Max, and Rose; grandparents, Phil, and Lola Rivera; grandparents. Joseph is survived by his children Jacqueline, Mercedes, Aaron and Marissa, his grandkids, great grandkids, his sister Jeanette, his brother-in-law Joe. He is the uncle of Kim, Dom, Michael, Vanessa M., Nicole, Tiffanie, Vanessa E., T.J., and Jennifer. A service of remembrance will be held at the Romero Family Funeral Home, services will include a viewing at 1:00pm succeeding a service at 2:00pm with Father Dang, and a reception at The Treehouse (The Mambo Café), 790 W. 84th Ave. Thornton, CO 80260.

The family of Joseph Tobias Marquez Jr. created this Life Tributes page to make it easy to share your memories.