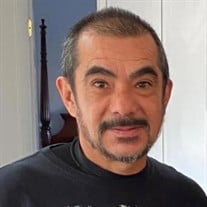 Kenneth Lee Sanchez passed away on May 27, 2021, surrounded by his loving family and friends in Lone Tree, Colorado. He was born in Alamosa, Colorado to Philomeno (Phil) Sanchez and Elsie Sanchez, of San Luis, CO. He was the youngest of eight children. Kenny married Eve Martinez, and they had a son Daniel Jeremy. At the young age of nine he took an old set of drums and taught himself to play. Later in years he became a member of “Los Amigos”, a local band in the San Luis Valley. Kenny lost his mother to cancer at the young age of eleven years old. He was raised by our loving sister Kathy and supported with love by his father and siblings. Later, Kenny and his father moved to Greeley, CO. Kenny graduated from Greeley Central High School. He then moved to Denver, CO. He never lost his appreciation for music. He joined another band which included Lerry Medina and Antonio Sanchez and together they were known as “San Luis”. Kenny was a little man with a big heart. A good heart. For his final gig, Kenny chose to be an organ donor. His 24 gifts will be helping hundreds of people through their health challenges. Although his work here on earth is done, his memory will live on. Kenny was preceded in death by his mother Elsie, dad Philomeno , and his wife, Eve, who died on July 3, 2016, due to cancer. Kenny is survived by his son, Daniel Jeremy Sanchez, Highlands Ranch, CO, his siblings, Eddie (Jeone) Sanchez, Brighton, CO, Kathy Sanchez, Greeley, CO, Jerry (Elizabeth) Sanchez, Lakewood, CO, Steve (Sally) Sanchez, Colorado Springs, CO, Lorenzo (Anne) Sanchez, Denver, CO, Sam Sanchez, Arvada, CO, and Monica (Joe) Lozoya, Greeley, CO. Also survived by his mother-in-law, Alice Martinez, sisters- in- law, Lisa Lowe (Jeff Harding), Jamie Martinez (Eloi Montoya), Sophia Martinez (Derrick) and brother-in-law James Martinez, Jr. Also survived by numerous nieces, nephews and cousins. A memorial service will be held in Denver, CO on June 17, 2021, at 9:00 a. m. at Romero Funeral Home in Lakewood, CO. He will be laid to rest at the San Pedro (San Pablo) Cemetery in San Pedro, CO on June 18, 2021, at 1:00 p. m. Arrangements are in care of Romero Funeral Home in Alamosa, CO.

Kenneth Lee Sanchez passed away on May 27, 2021, surrounded by his loving family and friends in Lone Tree, Colorado. He was born in Alamosa, Colorado to Philomeno (Phil) Sanchez and Elsie Sanchez, of San Luis, CO. He was the youngest of eight... View Obituary & Service Information

The family of Kenneth Lee Sanchez created this Life Tributes page to make it easy to share your memories.

Send flowers to the Sanchez family.