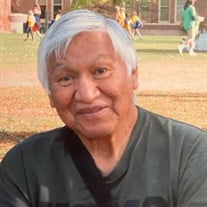 Leighton K. Roberts, Sr., “Ne ta ge ta ki” 79, was born on November 26, 1941 in Tama, IA. He grew up on the Meskwaki Indian Settlement and was the son of Reuben Mitchell and Elizabeth F. Roberts. He passed away Friday, June 18, 2021 at Villa Manor Care Center in Lakewood, CO. Leighton served in the U.S. Marine Corps and the U.S. Army, the latter where he earned his Culinary Specialist Certification. He spent over 15 years working as a welder with U.S. Steel and Zimmerman Metals. He would eventually finish off his work career with Kindred Healthcare, working as a cook. Leighton had a sense of humor, and many can recall instances of him in action. He loved to garden, he enjoyed reading the daily newspaper and doing crossword puzzles. He was a big fan of the Denver Nuggets and Colorado Rockies, and he loved to watch horseracing. Survivors include his sons John Roberts of Tama, IA, Darrell Roberts (Jenny) of Durango, CO, Jack Roberts of Denver, CO; his daughters Joetta Roberts of Tama, IA and Anita Roberts of Denver, CO; and his adopted son Jay Roberts of Des Moines, IA. He had 10 grandchildren, Brent, Brandon, Kyle, Tyler, Hailey, Olivia, Ana, Elizabeth, Leo and James; 11 great grandchildren and numerous nieces and nephews. He was preceded in death by his wife Dorothy, his son Leighton Jr., his father Reuben, his mother Elizabeth, brothers, Luther and Norwood, and sister Ernestine.

The family of Leighton K. Roberts Sr. created this Life Tributes page to make it easy to share your memories.

Send flowers to the Roberts family.