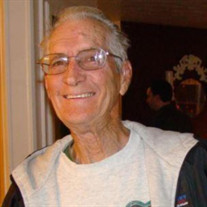 LeRoy Albert Amos was born on June 9, 1937 in Denver, CO. He passed peacefully on March 6, 2021. Roy enlisted in the Marines at age 17 and was proud to serve his country. He married the love of his life, Carol, in 1957. They shared 56 years together, raising four children. LeRoy had a true passion for cars and they provided him a lifetime of thrills, adversities, friends and employment. Roy enjoyed drag racing most of all. He participated in the sport as soon as he was able to obtain a driver’s license and continued to love the ride until 2019. He took pride in being one of the first racers at the local drag strip and then as one of the oldest racers still competing there. Roy also enjoyed time with family and friends, fishing, road trips, old western movies, music, slot machines and MGD. He worked as a mechanic for over 50 years, including at his own gas station, Burt Chevrolet and retiring from The Denver Police Garage. He is survived by his children, Jesse Amos/Kim, Tony Amos/Teresa, Joni Fox, Kandi McDonald, Michael Konrad, Brian Fox; grandchildren, Tyler Hansen/Brooke, Andy Amos, Ryan Fox, Amber Fox, James McDonald, Lee McDonald; great-grand children, Sara Reed, Jaedin Fox; sister, Jessie Gates; and numerous relatives. He is proceeded by his wife, Carol; brothers, Torche, Eugene “Bud”; sisters, Eula, Ande LeRoy was loved by many. He and his sense of humor will be missed by many more. We're having a celebration in honor of Roy Amos Saturday March 20th starting at 5 pm in the dinning room at the Lakewood Elks Lodge #1777, 1455 Newland St., Lakewood, CO 80214 (Colfax & Newland; across the street from Casa Bonita) with light dinner and beverages being served. Cash bar will be available. Hot Rods encouraged to honor Roy (weather permitting).

LeRoy Albert Amos was born on June 9, 1937 in Denver, CO. He passed peacefully on March 6, 2021. Roy enlisted in the Marines at age 17 and was proud to serve his country. He married the love of his life, Carol, in 1957. They shared 56 years... View Obituary & Service Information

The family of LeRoy Albert Amos created this Life Tributes page to make it easy to share your memories.

Send flowers to the Amos family.