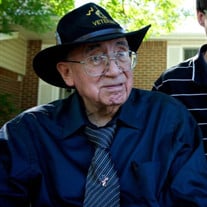 On May 14th, 2021, Levi Martinez died in Aurora Colorado from natural causes. He was 98 years old. Levi is preceded in death by his mother, Dulcinea Arellano; father, Delfino Martinez; stepfather, Francisco Arellano; his first wife, Clotilda Lobato Martinez; daughter, Berna Martinez Halko; son, David Ben Gurion Martinez; siblings, Idela Galvez (Antonio), Carlos (Sidelia), Rufina Cisneros (Adonisio), Arcenio Martinez (Eumenia), Aaron Martinez, Juan Nepomuceno, and Evaristo Martinez, and stepsister, Elena Watson (Elai). Levi is survived by his wife Svetlana E. Yamanova, siblings Lloyda Moy (Ernest), Delfino Martinez (Loretta), children Dolores C. Martinez Hernandez (Robert Hernandez), Taraz Martinez (Stephen Fordham), Yvette Martinez-Hochberg, Leah Martinez (Debbie), Emilio Martinez (Anthea Carson), Margaret Martinez-Colwell, (Jeff Colwell), grandchildren Michael Martinez-Schiferl (Liesl Schiferl), Margaret Elizabeth Reminga (Sean), Sr. Fatima Martinez Hernandez, Roberta Martinez Hernandez, Maria Martinez Hernandez, Teklebrhan Gebrehiwot (Hadera), Rezal Martinez-Gillies (Robert Gillies), Seth Hochberg (Nikki), Evan Hochberg, Levi A. Martinez (Kristin Pistel), Jordy Martinez, Isaac Martinez, Tara Martinez Fernandez (Ray Fernandez), Ben Colwell, Tilly Colwell, Lucy Colwell, Audrey Colwell, Raven Blinn, Sienna Martinez, Angelina Martinez, great-grandchildren Mateo Schiferl, Eva-Rose Schiferl, Gael Schiferl, Isabelle Reminga, Madeline Reminga, Alexander Reminga, Ealasaid Martinez Gillies, Iris Martinez, Phoebe Martinez Fernandez. Levi was part of The Greatest Generation; he lived through the depression, lost his father at age 12, graduated from high school at age 16, and joined the Civilian Conservation Corps at 17. Soon after he served in the Army during WWII and served in New Guinea. After his honorable discharge, Levi used the GI Bill and studied history at Adams State College in Alamosa, Colorado. He attended the University of Colorado in Boulder, graduated Order of the Coif, and received his LL. B. (Doctor of Laws) in 1951. While in law school he was a member of the Board of Editors of The Rocky Mountain Law Review, the law school's law journal. He authored an article dealing with the alien land laws of California, since abolished; and, the United Nations Charter. That article was republished in the National Law Journal. Levi also wrote an article advocating for women's rights to sue for loss of consortium, a right that was denied to women by some states at the time. He practiced law from 1951 to 1973 in Alamosa, San Luis, Pueblo, Denver and other parts of Colorado. Levi also practiced pro hac vice in other jurisdictions. Levi was politically active & had the opportunity to meet former President John F. Kennedy, who he was proud to support prior to his formal run for president. In 1962 President Kennedy and his staff visited Pueblo, Co. and Levi served as host. Levi often advocated for better representation for the American Hispanic communities. He was a big part of the effort to politically organize the Hispanic community in Pueblo during the 1960’s. Levi ran for the office of Governor of Colorado in 1966 under the New Hispano Party along with Tom Pino who ran for Lieutenant Governor. Levi was a founding member of Mexican American Legal Defense and Educational Fund (MALDEF) which is committed to protect and defend the rights of all Latinos living in the United States and the constitutional rights of all Americans. Levi was also an active member of the GI Forum. Throughout his law career and afterwards, Levi was involved in water right transfers from agricultural uses to municipal and industrial uses. His expertise in the water rights issues in Colorado began years earlier, soon after he graduated from CU in 1951. He represented his father-in-law and other water rights claimants in an extensive water rights litigation, some before the Colorado Supreme Court. Throughout these years, Levi owned or was involved with several business ventures including water, insurance, hotels, and construction. He enjoyed the fact that today the citizens of Aurora enjoy drinking water in their homes due to his efforts to acquire water for the city of Aurora. Later in life he was an author, a publisher, and a business consultant to small businesses. He helped many small business start ups and saw many succeed. Levi loved his family. He held a deep, firmly rooted belief in Catholicism. However, he also embraced all religions and all people. His faith in God helped him remain optimistic, even when faced with extraordinary circumstances. An avid reader of legal briefs, history, philosophy, biography, and religious texts, he held fast in the camaraderie of all humanity. He often encouraged others to pursue their dreams. His unflappable positivity, his confidence in the future, and especially his spirituality, will be missed by all his family and friends. The following services will be held on Friday, May 21st starting at 10AM at Annunciation Catholic Church, 3601 Humboldt St, Denver, CO. The viewing will be from 10AM to 10:30AM. Military honors and rosary will take place between 10:30AM and 11AM. Mass starts at 11AM. A eulogy follows the Mass. Masks and social distancing are required. No reception will be offered due to covid. The service can be viewed live in the Annunciation Catholic Church Denver Facebook page at: https://www.facebook.com/Annunciation-Catholic-Church-in-Denver-196206757133335/ The service will be available on the Facebook page for 2 weeks. An additional service and burial will be performed in Cerro, New Mexico. Details to follow. In lieu of flowers or cards, he asked that we mentor someone, be a friend to someone, support a child, say a prayer, and vote.

The family of Levi Martinez created this Life Tributes page to make it easy to share your memories.