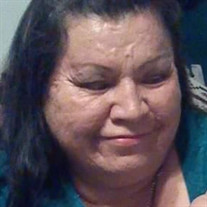 In Loving Memory of Lorrie Ann Matthews Sunrise 05/20/1963 - Sunset 09/06/2021 Lorrie was born on May 20th, 1963 in Denver, CO to Bessie Redshirt Matthews and Douglas Wayne Matthews Sr., Lorrie made her journey to the spirit world on September... View Obituary & Service Information

The family of Lorrie Ann Matthews created this Life Tributes page to make it easy to share your memories.

Send flowers to the Matthews family.