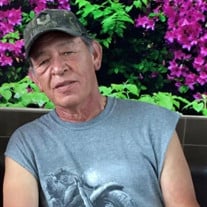 Louie “Letch” Rivera entered into eternity on May 8, 2022. He passed away peacefully with his loving family by his side. We are deeply saddened by his sudden unexpected death. He will be deeply missed by all those he left behind. In 1976, he met his wife Rose and they wed in 1977. They were blessed with two beautiful children, Louie Rivera Jr. and Anita Thompson. They remained together for 46 years. Louie grew up La Junta, Colorado. As a young boy he loved to spend time outdoors rifle hunting with his dogs. He loved music and would share special songs with those he loved. He loved camping and fishing. Louie loved to spend time with his children, grandchildren and family. He loved his family very much. Louie was a strong, kind, loving, generous and supportive father. He retired in 2019 and he spent his retirement basking in the joys of having his children and grandchildren around him. He was a machinist for many years so he was a perfectionist and he could fix anything and always make it better than it was before. His knowledge and guidance was invaluable to his family. God broke the mold when he made Louie. He was truly one of a kind. He will lovingly be remembered by his wife, Rose M Rivera; son, Luis (Traci) Rivera Jr; daughter, Anita (Ryan) Thompson; grandsons Dante Rivera, Dylan Rivera and Max Thompson; granddaughters, Katie Thompson, Allyson Thompson, Trinity Thompson; brothers, Nazario Ribera, Paul Ribera, Jerry Ribera; sister Kathryn Street, as well as many cousins, nieces and nephews. He is preceded in death by his father, Nazario Ribera, his mother, Celina Ribera, his brother Mike Ribera and other family members. We will all miss him more than words can say. You never said I’m leaving, you never said goodbye. You were gone before we knew it, and only God knew why. A million times we needed you, a million times we cried. If love alone could have saved you, you never would have died. In life we loved you dearly, in death we love you still. In our hearts you hold a place that no one could ever fill. It broke our hearts to lose you, but you didn’t go alone. For part of us went with you, the day God took you home.

Louie &#8220;Letch&#8221; Rivera entered into eternity on May 8, 2022. He passed away peacefully with his loving family by his side. We are deeply saddened by his sudden unexpected death. He will be deeply missed by all those he left behind.... View Obituary & Service Information

The family of Louie "Letch" Rivera created this Life Tributes page to make it easy to share your memories.

Send flowers to the Rivera family.