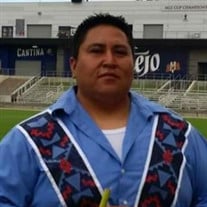 Chief Luther James Standing Bear Light in the Lodge, “Wakinyan Chάηzѐka” Indian name “Angry Thunder” enrolled member of the Rosebud Sioux Tribe of South Dakota, born August 26, 1982 to Calvin James Standing Bear Light in the Lodge Sr.(Sicangu/Oglala) and Irene Rose Yellow (Lo’Kaa Dine’e/Tachii’nii). He began his journey to the spirit world on December 12, 2021. He passed away at his residence in Thornton, CO in the presence of his wife Shawna Talk-Standing Bear and his four children Leia Duran, Kaya Duran, Mahpiya Standing Bear, and Tokala Standing Bear. His surviving family members are his wife and children, his father Calvin Standing Bear Sr. (wife-Ishoni), father in law Raymond Talk, his son Luther Standing Bear Jr.(Beverly Locust- mother, Cherokee, NC), his brother Calvin Jr. (Kimberly Locust), his sisters Antonia (Adrian), Rhonda (Joseph), and Kimberly Standing Bear-Light in the Lodge. Also his Cherokee adopted mother Patty Grant, his aunt Roberta (Demetrio-husband), and numerous aunts, uncles, and relatives on both sides of the family. In addition, his nephews: Chasing Hawk, Black Star, Bright Star, Thunder Hawk, Wakiyan, Eugene, Paul, James, Henry, Wanbli, Lawrence, Dewayne, and his nieces: Lela, Keya, Elizabeth, and Amanda. He is reunited with his mother Irene, daughter/niece Sunrose Standing Bear, and grand-mother Elizabeth Standing Bear, and other close family members. Luther was foremost a family man, both to immediate and extended family. He had immense love for his wife and children. He was the lead singer of the family drum Standing Bear Singers. He grew up learning ceremonial and pow wow songs from his grandmother Neva and father Calvin. He was a song keeper and a song composer. Luther and his brother Calvin Jr. taught pow wow songs, did performances for the Denver community, as well as universities across Colorado. He loved to travel to pow wows, contest sing, host gig, album record, and help any drum sing. He was a very knowledgeable public speaker. He was also a sundancer and a chanupa carrier. Luther began sundancing at the age of 15 at Hollow Horn Bear in Rosebud, SD. This past summer he had the opportunity to dance at High Star Sun Eagle Sundance in AZ with his siblings and cousin Howard Badhand. He was knowledgeable of his family tree, and he always taught the importance of knowing one’s history and family association. Our past is our future, and he remained resilient in keeping our traditions alive. He had a passion for fishing, camping, traveling, weight- lifting, cooking, storytelling, traditional regalia making, family history, and upmost keeping the family together. He was a generous giving person, he had a humorous personality, and a contagious laugh. He made friends wherever he went, and co-workers would call him Oso or Bear. He was a journey man iron worker and carpenter and working with concrete. Luther was a father figure to his nieces and nephews. He was someone they looked up to. He was always there for them when they needed him, and he did his best to guide them in life. He treated them as if they were his own children. He always looked at things in life through a Lakota perspective that “We are all related.”

The family of Luther James Standing Bear-Light in the Lodge created this Life Tributes page to make it easy to share your memories.

Send flowers to the Standing Bear-Light in the Lodge family.