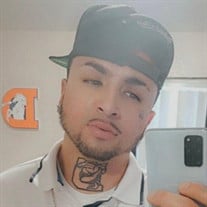 MarioLuis "Nesko" Julio Cordova Jr. received his wings on February 11, 2022. He is preceded in death by his aunt; Sue Gurule and great grandfather; Onofre Ortega. He is survived by his significant other; Monique Marquez, children; Antonio, Aniyah... View Obituary & Service Information

The family of MarioLuis "Nesko" Julio Cordova Jr. created this Life Tributes page to make it easy to share your memories.

Send flowers to the Cordova family.