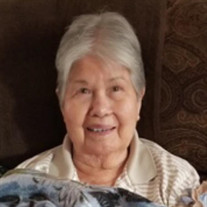 Mary Beatrice Lopez was called home to the Lord March 30 2021 she was 87. Bea (her preferred name) was born in Swink, CO on August 5, 1933 to her parents Leopoldo Lucero and Margarita Trujillo. Bea grew up in Trinchara and Aguilar, CO with 11 siblings. Bea attended school in Aguilar, where she met and married Joe Emerson Lopez and raised 4 sons together. They were married for 23 happy years before she lost him to a heart attack in 1976. Bea found love again a few years later with Manuel Salazar and moved to Raton NM where he help raise her youngest son, Christopher. Sadly she lost Manuel in 2001. Bea moved in with her sons, Leo and Jerry, in Northglenn, CO. in 2003 to be close to her family. Bea is survived by sisters: Ramona, Susan, Sally and Virginia and brothers: David and Richard. Four sons and daughters-in-law: Joe Emerson and Susan, Leopoldo, Gerald and Robyn and Christopher and Mona. Three granddaughters: Danielle, Angela and Kaitlin. Grandchildren: Sierra and Luther. Numerous nieces and nephews. Bea was a mother to all. Everyone called her Mom or Mama Bea. Bea was outgoing and friendly, she had an endless amount energy. It was difficult not to like her. Bea was always busy doing something. She crocheted beautiful afghans for family and friends. Bea also took up pottery and painting in her free time. She would do anything for her family. Bea thought she would be a nurse, while growing up, but she found love and started a family instead. During her time in Raton, she got to fulfill her desire to help people in need, when she volunteered at a center for mentally challenged children in Raton. Soon after starting everyone started calling her Mama Bea. Known for her selfless love, she prayed the rosary daily, and Mom adopted our friends and extended families. Our Lord has now called her home, greeting her with the words, “Well done, My good and faithful servant. Enter into your reward!” In Lieu of flowers, Donations may be made in the name of Mary B. Lopez to Saint Jude's Children's Hospital www.stjude.org

Mary Beatrice Lopez was called home to the Lord March 30 2021 she was 87. Bea (her preferred name) was born in Swink, CO on August 5, 1933 to her parents Leopoldo Lucero and Margarita Trujillo. Bea grew up in Trinchara and Aguilar, CO with 11... View Obituary & Service Information

The family of Mary B. Lopez created this Life Tributes page to make it easy to share your memories.

Send flowers to the Lopez family.