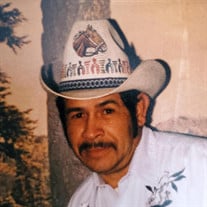 Mauro Ortiz Hernandez (5-3-1946 - 4-3-2021) Mauro was born in a small town called San Jose De Basoco Coneto in Durango Mexico in 1946. He was in the Mexican army in his teens and then he came to the U.S in order to have a better life and seek new opportunities. He met his future wife in 1981 and they had their first child in 1982. He worked hard doing many odd jobs to provide for his family, and this is where he discovered his love for cooking. Cooking is how he expressed his love, he enjoyed watching the expressions on peoples faces when they would eat his delicious food. A few of his specialty dishes were green chile,tamales,Chicharrones, Carnitas,ribs and mexican hamburgers. Naturally as a cook he loved to grow his own vegetables, so gardening easily became another one of his passions. Through the years he would travel back and forth to Mexico to tend to his ranch that he loved so dearly, always talking so proudly about his chile crops and animals, he was always excited to talk about projects he had in mind to start on his land. After many years of back breaking labor, his last job was as a cook at the Holiday Inn, which he enjoyed very much. It all changed when he was diagnosed with stomach cancer in 2016, he faced a full year of chemotherapy, having to receive treatments multiple times a week. He remained strong and endured it all, with the small joys to help him get through it such as his son in law (Cody) making sure to keep him comfortable by sitting down with him and enjoying a hot chocolate and breakfast sandwich after treatments to put a smile on his face.Visits from his favorite nephew Kiko always brought him joy, his nephew was always there for him, he loved him very much. He also enjoyed going to visit his son Reyes and spend time with his grandchildren. Finally after a full year of treatments he was in remission, but he was never quite the same. During the next few years he remained living with his daughter (Maura) whilst traveling back and forth to Mexico from time to time. Time passed and he knew something was not right, multiple trips to the doctors office later, and they would only say the same thing “You need to eat less more frequently”. Growing more frustrated and tired, he began losing weight because he was unable to keep any food down. He began getting weaker and thinner to the extent that he was unable to go on his daily walks anymore, that is when we knew something was wrong and rushed him to the hospital. Three weeks passed and the doctors said there was no more they could do...so they released him home on hospice. He came home and through the hospice nurse we unfortunately found out that his cancer had come back. Shocked in disbelief by the news he remained strong and confident that he would soon be up and doing his daily routines. Sadly this was not the case and he ended up passing away in his sleep on the early morning of April 3rd 2021. In the end he was a very strong, hard working man but he was good at hiding his pain from the ones who loved him. He leaves behind a wife (Geralyn) and 4 children: Anna, Mario, Maura & Luis and grandchild Coyote. Also from a previous relationship he leaves behind 4 children: Reyes, Esequiel, Eva & Elyisa and multiple grandchildren. The day he left this earth he has now joined his son Mario in heaven, I pass the torch to him to take care of our poppy now so that he may enjoy la buena vida.

Mauro Ortiz Hernandez (5-3-1946 - 4-3-2021) Mauro was born in a small town called San Jose De Basoco Coneto in Durango Mexico in 1946. He was in the Mexican army in his teens and then he came to the U.S in order to have a better life and seek new... View Obituary & Service Information

The family of Mauro Ortiz Hernandez created this Life Tributes page to make it easy to share your memories.

Mauro was born in...

Send flowers to the Hernandez family.