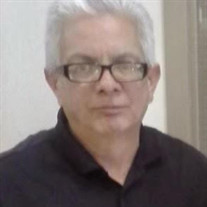 Michael Elias Garcia, age 63, passed away peacefully on January 19, 2022, with family by his side. He was born April 11, 1958, in Denver, Colorado to Raymond and Esther “Gloria” Garcia. Michael married the love of his life, Thelma “Marie” Garcia, in November of 1993. Michael known for his big heart and befriending everyone that he encountered. He would say he was lucky to raise six sons, but even luckier to get fourteen grandchildren that he spoiled daily. He also tendered to his three dogs (his babies) that of course he never wanted, but he spoiled daily as they followed and protected him even during the final moments of his time. For many years Michael worked as an Electrical Wholesale Salesman at Denver Distributors in Denver, Colorado. All those that had the privilege of meeting Michael knew they were in for a treat as they were all his “Coo” and would get offered a Bud Light. Michael is survived by his wife Marie; their six sons, Michael, Christopher, Nicholas, Matthew, Joseph, and David; Fourteen grandchildren, Kristina, Michael, Adriana, Gabriel, Talon, Ariana, Alezandra, Emiliano, Natalia, Angelo, Julian, Elise, Arya, and Alia; Three dogs, Kiper, Oreo, and Boo. All of these he loved and touched deeply. Please join us celebrating his life with the Rosary and Funeral being held at Romero’s family funeral home February 7, 2022 Viewing-5:00pm Rosary-6:00pm

The family of Michael Elias Garcia created this Life Tributes page to make it easy to share your memories.

Send flowers to the Garcia family.