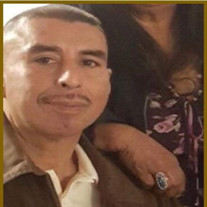 Michael Ray Ramos was born on July 22, 1966 to Madeline Reitz in Denver, CO and raised by his grandma Virginia Sandoval in Julesburg, CO. He was raised by his grandmother shortly after growing up in Julesburg with his beloved Grandma Virginia he and the rest of the family moved back to Denver, CO. Michael Ray spent time away at Job Corp in order to receive his diploma, he then continued to complete courses to receive his certifications in Computer Science and Human Resources. Once he finished his certifications he began courses at Denver Community College in downtown Denver to receive his Associates Degree. Michael Ray knew that he could do anything he put his mind to and was passionate about many things in life. The thing he loved most was cutting people's hair, he was known for his hair cuts from all his family and friends. He is survived by: Destinee Rae (Daughter) Nava Love Gray (Granddaughter) Aston R Gray (Grandson) as well as his younger children: Matthew (Son), Naveah, (daughter), Alexis (daughter), Noah (Son), Faith (daughter) and his mother Madeline Reitz. Proceeding to join his son Michael Ray Pacheco, his sister Virginia Arias, his brothers Santiago Cantano and Isidro “Izzy” Ibarra Jr, and his grandmother Virginia. My dad will be missed by everyone not a day will be the same without him, but he is now in the arms of the Lord with his son and his brothers and sister. My dad held no hate or fear in his heart he lived everyday to its fullest, he did his best in being a great son, father, grandfather, and brother as well as he was greatly loved by all his nieces and nephews, all his cousins, his uncles and aunties, and all other family and friends. He loved his family and not a day will go by that you are forgotten. Dr. Ray, “I am going to miss all the double teaming that we had together you will never be forgotten,” Love your sis Michelle.

The family of Michael Ray Ramos created this Life Tributes page to make it easy to share your memories.

Send flowers to the Ramos family.