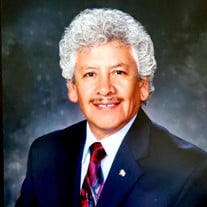 It is with deep sorrow and much love that we mourn the passing of Miguel "Mike" Martinez, 74, of Westminster, Colorado who was surrounded by his loved ones when he went home to be with the Lord on April 28, 2021. He is preceded in death by his parents, Petrolino and Refugio Martinez and sister, Ozella Dettling. Mike is survived by his loving wife, Lita Martinez; children, Christopher (Beth) Martinez and Dedric (Christina) Martinez; siblings, Marbella Perea, Rudy Martinez, Dorothy Khadem and Alice Duran; grandchildren, Zoe Millard, Austin Martinez and Alexandra Martinez. Mike was born in Alamosa, Colorado on February 8, 1947. He graduated from Antonito High School in 1965 and shortly thereafter joined the Air Force in 1966. He served in the Vietnam War from 1968-1969 serving as a Power and Communications Specialist. Mike was discharged from Beale Air Force base in Marysville, California in 1970 as a Staff Sargent and received the Vietnam Medal for his Vietnam service. After receiving an Honorable discharge, he served 18 additional years with the Air National Guard/Reserve in California and Colorado. While stationed in Wichita Falls, he met his lifelong love, Lita, and were married on November 15, 1969. They lived in California while Mike earned his degree in Recreation Administration from Chico State University before moving to Colorado in 1975. Mike began working for Public Service Company (Xcel Energy) on December 30, 1975 as a meter reader, eventually moving into Customer Service. He retired December 30, 2015, exactly 40 years to the day he started with Public Service Co. Mike was a very devout Catholic where he was a 37-year parishioner at Holy Trinity Catholic Church where he was a Lector, a Cantor, a Eucharistic Minister and actively involved in the office, fund raising events, and decorating the church. He also felt a strong connection to his Native American ancestry where he supported various Native American schools and missions. Mike’s lifelong passions included hunting, bowhunting, bowling, camping, spending time in the mountains, fly fishing on the Poudre River, and enjoying a nice big campfire. He loved his red wines, quality whiskeys, and an occasional cigar from time to time. He also had an endless thirst to tinker with stuff and took immense pride in fixing and maintaining his home and cars. But above all, Mike loved his family. He enjoyed spending time with his wife, his sons, his grandchildren, his extended family, his Texas family, and his church family. He made it a point to get to know everyone he came across. He loved to give nicknames and create relationships that would make a lasting impression on all who met him. He was loved by many and, thus, many will miss him dearly. On Wednesday 5/19, the family will hold a Viewing at 9:30 a.m., Rosary 10:30 a.m., and Mass 11 a.m. all at Holy Trinity Catholic Church. Military funeral honors to follow at Ft. Logan National Cemetery at 1:15 pm (family only please due to restrictions) followed by a reception in his honor at 4127 S. Sheridan Blvd, Denver, CO. Reception site will graciously broadcast the live stream of the Military Burial services on screens so you may go straight to the reception and watch the service or you can watch on your tablet or phone. Live stream link to watch Funeral and Military services is: http://joysquad.com/live

It is with deep sorrow and much love that we mourn the passing of Miguel "Mike" Martinez, 74, of Westminster, Colorado who was surrounded by his loved ones when he went home to be with the Lord on April 28, 2021. He is preceded in death by... View Obituary & Service Information

The family of Miguel Albino Martinez created this Life Tributes page to make it easy to share your memories.

It is with deep sorrow and much love that we mourn the passing...