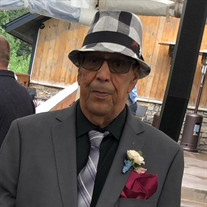 Orlando “Fred” Atencio, 74, was born on December 19, 1946 in San Antonio, Colorado, to Jose Atencio and Rubena Trujillo. HIs journey ended June 2, 2021 in Denver, CO, with his family by his side. Survived by Wife Lorraine, Step-Daughter Brenda (John), Son Fredrick (April), Daughter Catrina, Grandchildren Freddy (Michelle), Karissa (Rik), Jonathon (Michelle), Rayann, Aireana, Kaelee, Brittney, and Dacian, Great Grandchildren, Jace, Zarick, Jayden and Zaron, Brother Gilbert (Irene), Sisters Nadine and Mary, as well as numerous nieces and nephews, and pet chihuahuas Bella and Buzz. Fred was a Husband, Father, Pompo, Brother, Uncle, and Friend. He tried hard to live up to all these names. Family came first in his eyes. He enjoyed family get-togethers and made every attempt to ensure everyone was having a good time either by cracking a joke or getting the party started with a dance or song, even if there was no music playing. It was a must, all the kids had to have a bike of their own, that was the rule. The search for the ideal fishing spot was life long. Many were able to accompany him during his search and each have their own stories to tell. He had no fear when it was time to gamble in hopes of one day hitting the jackpot. His competitive side would always come out during a pool game in the basement or out in the horseshoe pit. He took pride in making the holidays brighter for everyone by simply lighting up the block with a decorated house during Christmas time, hosting a Fourth of July firework display, caring for his roses during the warm CO months, and making sure the neighborhood trick-or-treaters had enough candy. During football season, you can always count on Sunday afternoons watching the Denver Broncos over a bowl of freshly roasted pinon and a cold one. We will forever in our hearts hear “Que Tienes “, until we meet again.... The family of Orlando F. Atencio would be honored if you would Join them following the service for dinner and remembrance: VFW Post 5061 5220 Warren Avenue Denver, CO 80227 Please park across the street unless you have served in the US Military.

The family of Orlando Federico Atencio created this Life Tributes page to make it easy to share your memories.

Send flowers to the Atencio family.