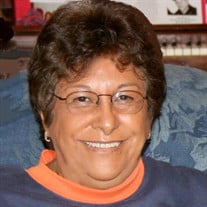 Patricia Trujillo Acosta, Went home to be with the creator in her sleep on Monday February 1, 2021. Patsy had been struggling with kidney and liver failure for some time. Pasty was born on July 05, 1946, she was 74 years old. She was the eldest of seven children who all attended Mapleton schools. Her Father, Julio Acosta, and two sisters preceded her in death. Her two grown sons are Pete (50) and Paul Trujillo (46). Pat had been in and out of the hospital these last few years. Recently Patsy was in hospice care for over a month at home. I am proud of my nephews for the care given to their mom these last few months and the years of care Paul was able to extend to his mom as Paul and Pat lived in their home together. Her boys, her dog, Daffny, her mom, Ramona Acosta, (93) and sister, Esther, and brothers, David, John and Julio, and family are sad. Pat was a beautician, a stay at home mom, and later became a paraprofessional at Skyview High School in the bi-lingual department and later retired from The Adams 14 School District. Pat grew up in Retreat Park in the home her father built with his own two hands. She attended Retreat Park School until Mapleton was built and then attended Mapleton High School until she graduated in 1964. She was a good student, continued her education and in turn, helped and touched the lives of many students. Pat grew up at a time when girls wore dresses, skirts, and bobby socks to school. Hair styles were big and skirts covered knees or ankles, and teachers smoked in the teacher's lounge. There was Color Day when students had huge tug of war games dragged through mud, the oil pole climbing, watermelon eating contests, night bonfires, and stuffing as many students as possible in a car or telephone booth. Pat started many projects, loved going to the casino, and was an avid Bronco Fan. She was blessed to have her two sons. Thank you to all those who have sent condolences and good wishes to the family, Sincerely, Esther Acosta

Patricia Trujillo Acosta, Went home to be with the creator in her sleep on Monday February 1, 2021. Patsy had been struggling with kidney and liver failure for some time. Pasty was born on July 05, 1946, she was 74 years old. She was the eldest... View Obituary & Service Information

The family of Patricia Yolanda Trujillo (Acosta) created this Life Tributes page to make it easy to share your memories.

Patricia Trujillo Acosta, Went home to be with the creator in...