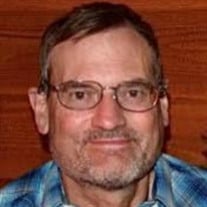 January 13, 2022 Peter Byron Sletten, age 62, passed away from a seizure after battling late-onset epilepsy for nearly 20years. He passed in his home, January 13, 2022 in Aurora, Colorado. Peter was born January 27th, 1959 in Amarillo, Texas, son to the late Willis H. Sletten and mother, Louise A. (Gilbert) Sletten, who now lives in Xenia, Ohio. Peter was baptized at St. Luke United Methodist Church and attended Olsen Park Elementary through 4th grade. In Texas, Peter’s father worked for the USDA following two years of civil engineering work with the Near East Foundation (NEF) in Iran. In 1967 Willis planned a return to NEF and a move to Africa, but in June the Arab-Israeli War forced the family to look elsewhere and they landed in Salinas, California, where Willis would work with the Soil Conservation Service. Growing up in Salinas, Peter graduated from North Salinas High School in 1977, where he’d found his love of sports and succeeded as a tri-sport athlete playing football, baseball and basketball. He also enjoyed golf, learned from his Grandmother Alta Gilbert, who was a leading lady of the sport in Lisbon, North Dakota. Inspired by his father’s work, Peter graduated from UC Davis in 1981with a Bachelor of Science degree in Civil Engineering, specializing in hydraulics and stream restoration. Like his father, he went to work for the USDA, Soil Conservation Service and became a registered professional engineer in California and Colorado. He met his now former wife, Ermelinda, in Santa Maria and they moved to South Lake Tahoe where they had two beautiful daughters, Kirsten Iona and Cassondra Louise, and a Husky named Tenaya. After ten years living in the High Sierras, Peter moved his family to Golden, Colorado where he enjoyed life on the front range of the Rocky Mountains. Some of his major projects and those he was most proud of included spectacular locations in our country’s National Parks and highway system; places such as Yosemite, Red Woods, the Lake Tahoe basin, Yellowstone and Bear Tooth Pass. Peter reveled in adventure and loved all things outdoors. He was a telemark skier, golf enthusiast, tennis club member and extreme mountain biker. Peter was proud of his heritage and took time to share with his daughters the values and history of Norwegian culture. He was an avid traveler, not only in the American West, but he also spent time traveling Europe, Austria being his favorite. He had a lifelong hobby building model train sets and shared these passions with his girls. He cherished his time with them in nature, on the ski hill and among the musical greats of our time, sharing concerts together at the world famous Red Rocks Amphitheater. He loved to share his devotion to music and the arts with family and friends. Peter retired after 32 years working for the federal government. He moved from Golden to Aurora where he still embraced music and biking up until the very end. Peter is survived by his daughter Cassondra Sletten; daughter Kirsten and her spouse Ryan Daley; his brother John Sletten; and his mother Louise Sletten-Hahn. A private family memorial service and burial will be held in Lisbon, North Dakota and a spreading of his ashes and celebration of life will be held in South Lake Tahoe, California. The Romero Family Funeral Home of Aurora is handling initial arrangements.

The family of Peter Byron Sletten created this Life Tributes page to make it easy to share your memories.

Send flowers to the Sletten family.