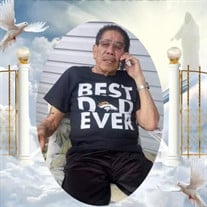 Richard D. De Leon Sr, his first roar 05-19-1941 and his last roar 12-04-2021 leaves behind his wife Kathy De Leon 4 Sons, Richie De Leon, Nicholas De Leon, Daniel De Leon, Jay De Leon; 2 Daughters, Nannette De Leon and Francine De Leon; 2 Step-Children, Stephanie Martinez and Albert Martinez; 33 4 Brothers, Frank Jr., Melvin, Fred, and Dave; 2 Sisters, Gloria De Leon and Loretta Rameriz; Grandchildren, 31 Great-Grandchildren, his Aunt, Alice Marruffo, along with numerous Cousins, Nephews and Nieces. He is joined in heaven by his Son Robert De Leon, Stepdaughter Genieva Fierro Sanchez, Grandson Alexander Martinez, Brothers Salvador De Leon, Ben De Leon, Ralph De Leon and Gerald De Leon, Sisters Mary Lou De Leon and Betty Dressler, and his Parents, Frank DeLeon Sr and Mildred (Vasquez) De Leon. Richard graduated from West High School and immediately entered the United States Army. He was stationed in Georgia for 4 years and was honorary discharged in 1964. He made his home in Denver, Colorado, raising his many kids and grandchildren, while driving a bus for RTD for over 20 years. He had a generous heart and always had his door open for his children and grandkids. We will all remember the parties and the oldies music being played for any occasion. Richard was always at the pool table (His Lion’s Den) playing pool, enjoying his oldies and a cold Michelob. He spent all the time he could laughing bullshitting and joking. Richard was a dedicated, strong, stubborn man who always spoke his mind. If he wasn’t the life of the party, he was working on his yard trimming his bushes. cruising his cars and trucks or going to the flea market looking for his next model car to add to his collection. He told his grandchildren the best advice and his favorite saying was “be like a duck and don’t give a “(we all know what was coming next, but he’d never say it in church). We all have so many memories and would love to hear and share them with you. Please join us in a final goodbye to Richard D. DeLeon Sr. on January 15, 2022 @ 11am at The New Life in Christ Church, with Pastor Mike Duran officiating, at 1380 Ammons St., Lakewood, Colorado 80214.

The family of Richard D. De Leon Sr. created this Life Tributes page to make it easy to share your memories.