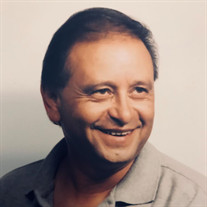 Robert "Bob" "Rob", "Robbie" Martinez Sierra Garcia Jr. went to be with Jesus on July 20, 2021. He is preceded in death by his son Bryan Anfield. He is survived by 5 of his 6 children - the youngest being Tyler Garcia and 9 grand children. His wish was to also acknowledge his significant other Chris Callen "Ms. Kentucky". He let everyone he met know he had 6 sisters: Magdalena "Frenchie" McGrath, Vincentitia "Vinnie" Garcia, Odell "Della" Cruz, Alicia "Alice" Salazar, Naomi "Norma" Garcia, and Maryann "Mary" Garcia; and numerous nieces, nephews, cousins, great nieces and nephews. He was born in Fort Collins, Colorado on July 9, 1946 to Robert Sierra Garcia Sr. and Polly Martinez. He has lived in many places throughout Colorado - Ault, Boulder, Fort Collins, Greeley, Denver, Thornton, Northglenn, and most recently in Commerce City. Bob loved to play chess and was quite good at it (Class A) - a hobby he was taught by a mentor who changed his life while he was living in Golden. From early on Bob had a knack for cars - many people still talk about his '57 Chevy that he rebuilt. That passion took him to working for various automotive parts suppliers and propelled him to owning and operating Bumper-to-Bumper automotive parts business in Boulder. He had always had an entrepreneurial heart and from one business to another, he became a mortgage broker and Garcia Financial was born. After the fall of the housing market, Bob went to school and became an over-the-road truck driver. He absolutely loved driving the big truck and would often take family and friends on some of his journeys. He drove a school bus with Denver Public Schools as well. Participated in the "School Bus Olympics" and had a good time. He enjoyed all that he did and gave his all, from working on cars, to camping and fishing. His family described him as very caring, tough at times, and a good father figure. He will be missed by all who knew and loved him.

Robert "Bob" "Rob", "Robbie" Martinez Sierra Garcia Jr. went to be with Jesus on July 20, 2021. He is preceded in death by his son Bryan Anfield. He is survived by 5 of his 6 children - the youngest being Tyler Garcia and 9 grand children.... View Obituary & Service Information

The family of Robert "Bob" Martinez Sierra Garcia JR. created this Life Tributes page to make it easy to share your memories.