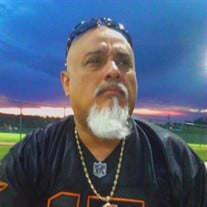 In loving memory of Robert Lee Vigil II, 62 of Lochbuie Colorado. Passed away Monday, January 3,2022. He served in the United States Army for 4 years. And retired from the United States Denver Mint after 29 years. He loved dancing, singing,... View Obituary & Service Information

The family of Robert Lee Vigil II created this Life Tributes page to make it easy to share your memories.

Send flowers to the Vigil family.