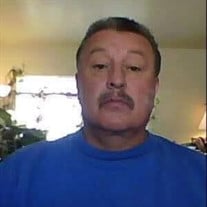 Ronald Kenneth Gonzales Sr (Ronnie) age 62 of Westminster, Colorado was born on September 2, 1958 and went home to heaven February 17, 2021. He was the son of the late Maximillion and Virginia Mascarenas. Husband to Vincenta Hernandez together they had three children, the late Estralinda Hernandez (spouse Larry), Ronald Kenneth Gonzales Jr and Virginia Gonzales (spouse Steve). He was the brother to the late Lucinda Correa (late spouse Paul), Cheryl Scheffel (spouse Bob), Rosemarie Mascarenas-Serrano (late spouse Gerard), the late Maxine Harper (spouse Richard) and Bernadette Wyse (spouse Darren). He had eight grandchildren Eugene, Savannah, Angelique, Frankie, Toino, Desmond, Ronald III (Kenny) and his youngest granddaughter Laryssa. He also had several nieces and nephews and numerous cousins. He was born and raised in Denver, CO later in his late teens his family moved to Thornton, CO. Ronnie was an interesting kind guy is how his niece Angel described him. He had a big heart, always willing to offer his home to family, friends even strays if they needed a place to stay his son adds. Ron was raised in a good home with awesome parents and sisters who adored him. He was happy as a child. His wife says he was a good husband, great father and even a better grandpa, she added, he would take his grandkids fishing, for walks in the park. The love he shared with his family was unconditional; he never wanted to be apart from any of them. Really, if it were up to him, they would have all lived in the same house together forever. Although He did not always keep his promises once he would say his famous four words “I Swear to GOD '' it probably wasn’t going to happen and if he said “Honest I Swear to God” it definitely wasn’t going to happen. It was okay though; anyone that knew him had to love him says his son. Ronnie was so full of life and fun to be around. We may not be able to see your smiling face any more, but all the beautiful memories of you will remain in our hearts forever. You will be missed by so many “we swear” we were always told not to swear to God, but that was his prayer, praying that we would believe him. You are at peace no more pain no more sorrow, so fly away with the angels Bro your free, we all love you so much.

Ronald Kenneth Gonzales Sr (Ronnie) age 62 of Westminster, Colorado was born on September 2, 1958 and went home to heaven February 17, 2021. He was the son of the late Maximillion and Virginia Mascarenas. Husband to Vincenta Hernandez together... View Obituary & Service Information

The family of Ronald Kenneth Gonzales Sr. created this Life Tributes page to make it easy to share your memories.

Send flowers to the Gonzales family.