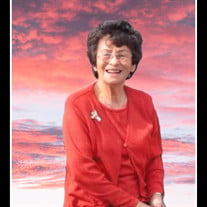 Rosabel “Rose” Martinez 90, of Denver. Went home to be with the Lord on December 23, 2021. Family includes her, Father, Nicholas Martinez; Mother, Elaisa (Maes) Martinez;1 Brother 3 Sisters, her children, 10 children total 5 boys and 5 girls, Eli Pacheco and wife Janet Pacheco, Steve (Stephan) Pacheco (deceased), Steve Pacheco, Leona Garcia (deceased) and husband Patrick Garcia (living), Danny Pacheco (deceased), Michael Pacheco, Eleanor Castillo, Diane King and husband Frank king, Elizabeth Langford and husband Mike Langford and Norma Jean Pacheco. Rose has 23 - Grandchildren, 54 - Great Grandchildren and 3  Great, Great Grandchildren. Viewing 9-10 AM. Funeral Service 10 AM. Monday 1/10 at Romero Funeral Chapel, 4750 Tejon St. Denver, CO. Internment to follow at Mt. Olivet Cemetery. Reception back at Romero Funeral Home, Denver. There are so many beautiful, loving, and heartwarming truths that I can write in this obituary about my mother that it would take you all of 90 years that she lived to go through it with me! Our mother Rose Martinez aka as Momma-Cita and Sweet Pea was a woman with so much unconditional love not only for her children but for anyone who came to know her.  Even a stranger that she would cross on the street would leave with a smile and contentment of the love this woman gave with her understanding heart and compassionate words she would leave with them.  Always with a touch from her hands to their hearts!! She was by far the strongest woman both physical and mental I have ever known. Nothing ever seemed to get her down nor in her way to be the best she could be, all for the love of her children. When she and my father and a few of my siblings moved from New Mexico to Denver Colorado her English wasn’t her primary language. She grew up speaking Spanish and taught herself the English language later in life but no language barrier could stop people from understanding exactly what her heart was saying to them. She had a zest for life and her life was undoubtedly lived primarily for her children and grandchildren, her family. She always tried to be as happy as possible even when times were hard for her. She taught all her children to respect others, never take advantage of anyone, and never ask for anything you didn’t not need but however she was the first to give anything of monetary value and again her heart!! She was a proud women. Even though times got hard, She never let her children know, she would play silly games with us so we could laugh and smile when things were not going right.  Her home was as clean as the day is long. People would say you could eat off her clean floors. But even as hard as she worked inside and outside the home she was never too tired to listen, to heal or to protect her loved ones.  If anyone was to ask her to spend time with them she rarely refused…she would even love spending time with those that asked her to go up the hill  to the casinos and stay longer than she wanted just to make sure others were having fun. Although, she did love those nickel machines! She loved to cook and was terrific at it, Mexican food, homemade breads, puddings and the best soppaias  in the west…east, north and south!! All the neighbors would almost stand in line to get a taste of her homemade sopaillias  .  She was such a stickler about being on time. When she wasn’t at work she was in the kitchen cooking her children full course meals…mealtimes were always on time and so was every holiday meal that she cooked from early in the morning before the sun had a chance to rise.  Mother was extremely smart although many may not have known that as she was also shy sometimes because of her Spanish accent but nonetheless she was so proud to be of Hispanic background. She would March every year with her family on what was then Mexican Independence Day; September 16th. Crossword puzzles she mastered she loved her puzzle books early in the morning right after reading her Bible verses she would warm up her coffee and start her puzzle book. She was the strongest woman both physical and mental that I have ever known. She stood behind what was right and although she may have snapped at you for doing wrong but within five minutes she would call you back or in person she would come to the room and show you so much compassion and love. She Never learned the term or for that matter exercised the meaning of “holding a grudge”! Our mother was born in Dixon, New Mexico October 3, 1931, she married our Father Benjamin Pacheco. Then they mover to Denver Colorado  around 1956. Her and our dad Ben divorced 1961 and after losing her second child to pneumonia she was left to raise nine children as a single Mother.  And, till this day we children couldn’t be more proud and worship the steps that beautiful women left behind. Her love that she left all of us and beautiful memories will be embedded in our hearts and souls forever. Being a Christian women she is now with our Father God in Heaven and the days to come will take us closer to reuniting with our mother, grandmother and best friend forever and we will all worship our Lord Jesus Christ in the next life forever and ever.

The family of Rosabel "Rose" Martinez created this Life Tributes page to make it easy to share your memories.