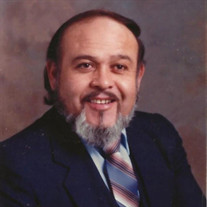 Theodore (Ted) William Gurule, of Denver, Colorado passed away on Thursday Jan. 7, 2021 at the age of 80. Mr. Gurule was born on March 18, 1940 in Alamosa, Colorado to the late Joe N. Gurule and Eleanor M. Reyes. He worked as a custodian for... View Obituary & Service Information

The family of Teodoro William Gurule created this Life Tributes page to make it easy to share your memories.

Send flowers to the Gurule family.