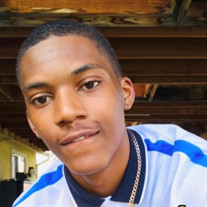 Va'Jon Donovan Lewis July 23, 2001 ~ May 13, 2022 Va'Jon Donovan Lewis was born on July 23, 2001, in Denver, Colorado, to his parents, Sharnell Lewis and Vontrell Lewis. He was the first child born in the family with sisters, Vanessa and Rielle. He mentored and nutured by his godfather Terry Smith, and he was always tehre for Va'Jon. As a child, Va'Jon was very active. He loved riding motor bikes, listening to music, playing video games, jumping on the trampoline, and doing back flips. Va'Jon was extremely talented in sports; he played basketball and football. Va'Jon was educated in the public school, He attended school at Watch Care Academy, Maxwell Elemetery, Martin Luther King, Jr., Early Colllede, and the he transferred to Collegiate Prepatory Academy, where he received his High School Diploma. Va'Jon continued his education at Lamar Community College in Lamar, Colorado. By profession, he worked for Animal Suplly Distribution as a forklift driver. In his free time, Va'Jon enjoyed spending time with his family and friends, playing basketball for the Warriors, football for the Slime Boyz, chess, and four-wheeling. His closest friends, DiJuan Williams, Monte Hayes, Drahke "DayDay Dachaun Davis, Khaalia Stevenson........ Visitation, Friday, May 27, 2022 at 10:00am, with a Celebration of Life Services at 12:00pm; with then a Dove Release Ceremony at 2:00pm all at Romero Fuenral ~ Chapel of Repose, 15150 E. Iliff Avenue, Aurora, Colorado. Repast at 3:00pm to 6:00pm at the Romero Reception Hall.

The family of Va'Jon Donovan Lewis created this Life Tributes page to make it easy to share your memories.

Send flowers to the Lewis family.