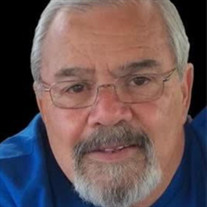 Our beloved father, Victor Gonzales, entered into God’s Kingdom on April 25, 2022, at his home after a two-year battle with cancer. He was surrounded by many loving family members when he passed. Victor was born in Pueblo, Colorado, on March 7, 1944, to Velma and Manuel Gonzales. He is preceded in death by his beautiful bride Cecilia, daughter Patricia, granddaughter Victoria, grandson Rigoberto, his parents, his brothers Louie, Thomas (Tucker), Ray, and sister Libby. Victor married his middle school sweetheart Cecilia on October 20, 1964. Together they created a beautiful family. Daughters - Veronica (husband Chris Nieto), Patricia Rodriguez (with the Lord), Lisa Miramontes, Amy (husband Tony Valdez), and Erica (husband Elijuh Gonzales). Eleven grandchildren - Michael, Matthew, Christina, Michael Moses, Victoria, Erica, Sara, Zechariah, Dene’, Adriann, and Elijah. Fifteen great-grandchildren - Michael (Mikey), Aliyah, Mari, Arianna, Matthew Jr. Vianey, Leonidas, Elias, Ezzariah, Michaela, Moses Jr., Alexis, Adelina, Jaden, and Liam. He also leaves behind two brothers, Joe and Gary. Victor was a skilled welder fabricator by trade for 48 years, and his marvelous works can be seen all over Colorado. Following his career, retirement was not an option, as he chose to continue to work with his hands until the end of his life. Victor was a man of few words but a lover of his family. He was witty, a straight shooter, and a man who firmly held on to his faith and beliefs. He enjoyed golfing, welding, sports, playing family games, restoring vintage cars, and telling tall tales to his grandchildren. His presence will be deeply missed by his friends, family, and all who knew and loved him.

Our beloved father, Victor Gonzales, entered into God&#8217;s Kingdom on April 25, 2022, at his home after a two-year battle with cancer. He was surrounded by many loving family members when he passed. Victor was born in Pueblo, Colorado, on... View Obituary & Service Information

The family of Victor Gonzales created this Life Tributes page to make it easy to share your memories.

Send flowers to the Gonzales family.