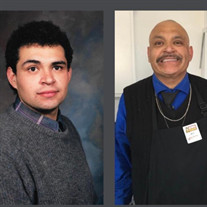 Wesley Alan Martinez "Wes" received his wings on December 16, 2021. He was born in Denver Colorado on December 13, 1965. Wes is preceded in death by his mother Mary Jane Cabral; grandparents Mary and Arturo Toledo; stepson Michael Martinez; the mother of his child Sharon Belearde; stepson Andrew Cisneros; and his dog Marely (MooMoo). He is survived by his son Aaron and wife Christina Martinez; sisters Alma Moranchel and Yolanda (Anthony) Leal; several nieces, nephews, and friends. Wes loved his son Aaron, cruising his 64 Impala and playing loud music on his cool systems. He was a meat cutter and member of "Showoff" car club. He enjoyed working, walking the park (Sloans), cooking, and loved eating his habanero pork green chili. Some of his favorite foods were BLT, Smothered burritos, tacos, enchiladas, jalapeno poppers, beans, rice, tortas, mole, and more. Wes loved sweets like Lemon cookies, ice cream and especially his sister Yolanda’s chocolate cake! He had good taste in music and had a special bond with all his dogs, but Marley was his heart. He liked watching boxing and loved the Broncos. Daddy Wes was very funny, well known, a good person to talk to, very friendly and big hearted. He was old school and lived by his own code. Wes was very hard working and loyal. He was humble, Stubborn at times but so caring and selfless. Some of his favorite shows and movies were Bad Santa, Old School, Training Day, Madea, Curb Your Enthusiasm, Seinfeld, Judge Judy, King of Queens, and Two and a Half Men. Anybody who knows him knows he will not go past 10th and Federal. He helped a lot of people and touched a lot of hearts truly one of a kind and a special soul he will be unexplainably missed!

The family of Wesley "Wes" Alan Martinez created this Life Tributes page to make it easy to share your memories.