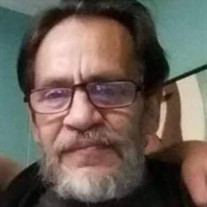 Preceded in death by his parents, Julian Montoya and Jenny Montoya; Daughter, Destiny Montoya; Brothers, Fabian Montoya, John Castro and Efrain Rodriguez; Sister, Rachel Camacho. Survived by his son, Julian Montoya; Sisters, Julia Montoya Lopez, Antoinette Martinez and Pauline Vigil, along with numerous grandchildren and extended family and friends. GROWING UP WITH MY BROTHER AL (That’s what I called Him) We grew up in a house on Curtis Street. Al was four years older than me, and Fabian was three years younger than me. The three of us used to play outside all day, making mud pies and dirt bombs. We would chase each other around and throw the dirt bombs at one another. I remember we would stay outside all day until the sun started to go down, or until mom told us to get inside. As you probably could tell I was a tomboy. I had to be growing up with those two. The three of us would walk to school every day. We would play fight on our way to school. Al signed up to be part of the safety patrol at school. He liked being a safety guard. Making sure us kids would get to where we needed to be. I remember during the summer our mom and dad would take us to Mestizo Park, Lakeside or the Zoo. We would always do things as a family. When my dad would get home from work, we would have to be ready for dinner. Al loved mom’s homemade tortilla they were his favorite. He also enjoyed her tostadas. When Al was older, he liked to take care of mom in the morning, by making her breakfast, Bacon, eggs, and potatoes with coffee. Al liked to listen to music from the 50s and 60s. He liked Elvis Presley, The Beetles, Led Zeppelin, The Doors and Eric Clapton just to name a few. He liked to watch horror movies; he was a big fan of Alfred Hitchcock. Al worked seasonal for the city and county of Denver parks and recreation, maintaining City Park. AI also worked for JC Auto Electric. Rebuilding starters and alternators. In 2006 Al lost his daughter Destiny. It took a toll on his health. Al would call me to bring him tobacco, soda, and sweets. He loved milky way candy bars. I would take him little goodie bags every other weekend. Until his health started to decline. Thank you for being a part of our lives. May you rest in peace Al, you will be missed but not forgotten. Love you Brother!

The family of William Alex Montoya created this Life Tributes page to make it easy to share your memories.

Preceded in death by his parents, Julian Montoya and Jenny Montoya;...

Send flowers to the Montoya family.